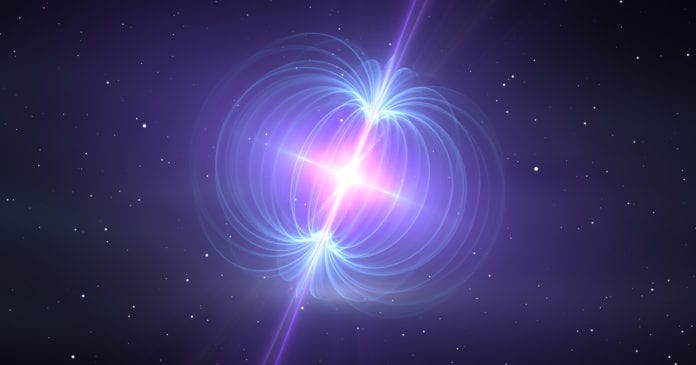 Fast Radio Bursts are transient radio pulses that we have known about for quite some time. Researchers have observed these fast radio bursts multiple times; however, only one star in our galaxy has been caught emitting these bursts. Known as the Magnetar SGR 1935+2154, it is a special neutron star, and it has again attracted the attention of researchers from around the globe. The Magnetar has flared up once again and started emitting fast radio bursts recently. This little dead star might be of huge help in understanding this mysterious phenomenon that has confused scientists for quite a while now.

The CHIME/FRB collaboration detected the fast radio burst from SGR 1935+2154 on 8th October 2020. Another detection almost immediately followed by the FAST radio telescope. The latter discovered a pulsed radio emission that could only be from that particular magnetar. This particular star was already on the watch list of astronomers because of the sheer potential that this one celestial body holds. Researchers will try to understand the potential relationship between FBRs and magnetars through this observation. The recently detected FRB lasted only for 3 seconds, where each burst lasted for three milliseconds only.

Despite the short duration of these bursts, they can be quite powerful. They can have energy worth hundreds of millions of Suns. We found the first FRB in 2007 from a source outside of our galaxy; ever since then, the hunt has been on to find what causes these bizarre phenomena.

What makes studying these bursts difficult is that they only last for a short time, which ensures that by the time our resources are ready to study them, they have already died out. Much of the FRBs come from really far away sources, making it almost impossible to pinpoint a single star that could be responsible. All this, coupled with the fact that most FRBs flare up once and then are never detected again, makes studying them one of the most challenging tasks in astronomy.

The recently detected FRB is not as powerful as those from other galaxies; however, it has the same characteristics. The source of this new FRB is a Magnetar, which are a mystery in themselves. There are only 24 confirmed Magnetars in the Universe. They are almost identical to any other Neutron star. However, the difference lies in their extremely powerful magnetic fields that have puzzled researchers for a very long time.

As the study goes on, we will likely see more evidence for and against the hypothesis that magnetars are behind these fast radio bursts. Whatever might be the end conclusion, researchers are extremely confident that this new observation will play a pivotal role in getting there.