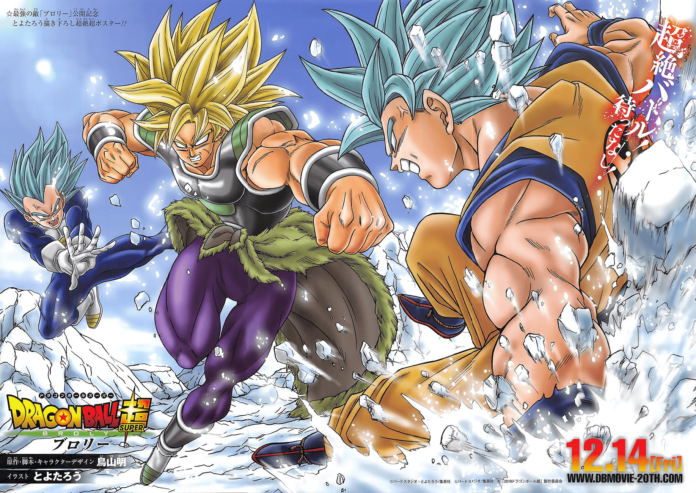 The Dragon Ball franchise has been on the rise ever since the release of Dragon Ball Z: Battle of Gods way back in 2013. The movie introduced a new level of power for Goku in the form of Super Saiyan God and basically set in motion a new era for what is regarded by many as the grandfather of shonen anime. Dragon Ball Super released soon after, and we even got another movie which brought back arguably the series’ greatest villain, Frieza.

While Super ended early last year, fans were understandably disappointed, but they would not stay that way, for a new movie was almost immediately announced that was a successor to Super and would continue the story after the Tournament of Power. The hype grew even larger when it was revealed that the new villain was none other than Broly, the legendary Super Saiyan. This time around, though, he would be completely reworked by Toriyama himself and would be a brand new character, fitting into the canon of the Dragon Ball universe for the very first time. I was a little trepidatious about this movie because Resurrection F was all right at best, and didn’t quite capture the heart and soul of Dragon Ball. However, I am overjoyed to say that Dragon Ball Super: Broly, carries none of its faults, and is, in my opinion, the greatest Dragon Ball movie ever made.

The plot, while simplistic, seamlessly introduces the main characters of the movie and sets up the clash that dominates the second and third arcs. Much like the original Broly movie released in 1993, this movie has King Vegeta, ruler of the Saiyans, exiling a newborn Broly because of his enormous power level, which he fears is a danger to his entire planet. Paragus, the boys father, chooses to follow Broly and forsakes his home world, vowing revenge on the King. Meanwhile, Bardock, a warrior in the army, is worried that Frieza, the tyrant who rules over their race, is going to wipe them out in one fell swoop. To this end, he sends his son, Kakarot, to a distant planet, knowing that he will live on. His fears prove right as Frieza unleashes a devastating attack, wiping the Saiyan’s homeworld of the face of the galaxy. Prince Vegeta survives, however, by virtue of being on a different planet, and just like that, the scene transitions to the present day, where Goku and Vegeta get wind of Frieza planning to gather the seven Dragon Balls. Upon confronting him, however, they find he’s recruited two Saiyans, who are none other than Paragus and Broly. The much awaited battle finally begins as Goku, Vegeta and even Frieza attempt to stop Broly before he destroys the Earth.

The first thing you’ll most probably notice about this movie is the quality of the animation. In a sharp contrast to Super’s more modern looking style, this movie features traditional animation, and as a result, all the character designs look sleeker and simpler, with crisp movements and sharp images to ensure that your attention is focused on the characters at all times. The colours are dynamic, quickly changing from one to the other, particularly during transformations. There’s a beautiful sequence when Goku unleashes his Super Saiyan God form and the colour transitions from yellow to red in such a smooth fashion. This was Dragon Ball looking at its best, and quite frankly, its going to be hard to go back to any other animation in the franchise after witnessing this.

The voice acting is superb, as always. Sean Schemmel and Christopher Sabbat knock it out of the park, and Christopher Ayres as Frieza is also remarkable. A special mention has to go to Vic Mignogna as the titular Broly, because he is, quite simply, in terms of voice acting and development, the best character of the movie. There have been several videos and articles on Avengers: Infinity War saying that the main hero of the entire movie isn’t the Avengers, but is in fact Thanos. In a similar fashion, I would argue that the protagonist of this movie is Broly. We are seeing his story play out, with Boku and Vegeta being obstacles that he has to overcome. We learn at the beginning of the movie that he is essentially a slave to Paragus due to his inability to control his power, and his entire arc is breaking free and learning that he can be the master of his own destiny. And by the end of the movie, you really get a sense that this is the continuation of Dragon Ball Super’s story; its not filler or something that was churned out to appease fans in the interim between Dragon Ball series.

Overall, Dragon Ball Super: Broly is a magnificent film. Its a must watch for any Dragon Ball fan and a great time for any fan of anime in general. The animation is mind-blowing, the story is deep and meaningful, and the amount of love and care put into each and every detail of this world is apparent from the first minute of the movie.