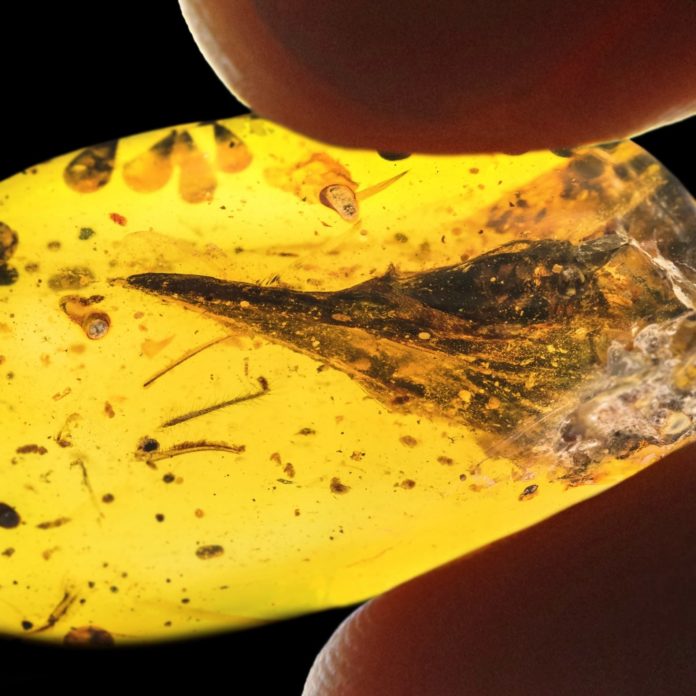 Contrary to the popular belief that dinosaurs were huge hunkering pieces of meat which roamed the planet sixty-five million years ago, the head of a minuscule dinosaur has been found perfectly preserved in amber. Recently discovered by a group of researchers, this amber encapsulates the whole head of a tiny dinosaur, perfectly preserved.

The fossil was found in Northern Myanmar, in a piece of Amber that is ninety-nine million years old. It’s a skull of a dinosaur that resembled a bird and judging by the size of its head, researchers expect the body of the dinosaur to be as large as a bee hummingbird, the smallest living bird.

The dinosaur which previously held the title, the Microraptor, was a couple of feet in size and could weigh up to a couple of pounds. Compared to that, this discovery is a huge leap in our understanding of the biology and the ecology of the prehistoric period. The problems that such small dinosaurs present with respect to Biology is the question as to how do they fit all the necessary organs in such a small space. This discovery could also help the researchers gain some insight into how small birds evolved from big dinosaurs.

The fossil is also very contradictory in its features. Researchers have observed a very large number of teeth on the jaw of the specimen, indicating that it was a predator which probably ate insects. The eye sockets of the specimen are to the side, which is contrary to the binocular vision that evolutionary biologists associate with predators.

The specimen also has some soft tissues left. This is common for fossils preserved in amber as the sap surrounds and isolates the sample at the moment of its death and prevents any substantial decay. This specimen could prove to be a really helpful stepping stone for the ongoing effort to understand these mysterious creatures.