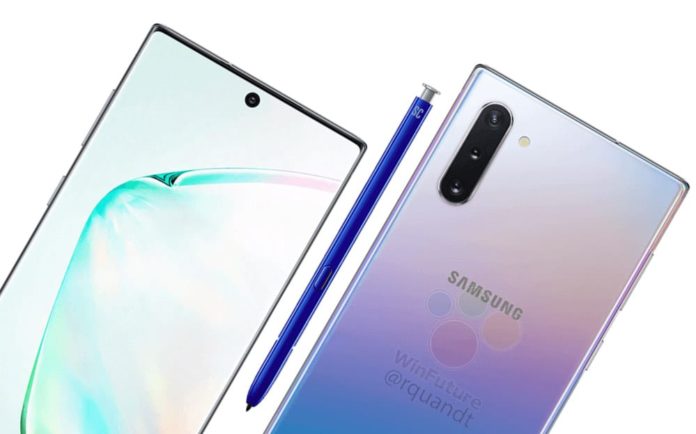 After tasting immense success with the Galaxy S10 and S10+, it looks like Samsung is back for an encore! The Galaxy Note 10 variants have been leaked in entirety, a significant period of time before launch.

Images leaked by Roland Quandt at WinFuture and MySmartPrice contributor Ishan Agarwal, together with FCC specifications, confirm the legitimacy of these leaked images. According to these images, we can, without a doubt, confirm that the Galaxy Note 10 will wield a hole-punch cut-out for the front-facing camera, smack dab in the center and right below the ear-piece. The absence of a fingerprint scanner most probably means that Samsung will be carrying over their ultra-sonic in-display fingerprint scanner from the S10.

Being very Huawei-esque in their approach, Samsung seems to have finally jumped ship to the gradient-back camp (hallelujah!). On the right side, we observe an absence of any buttons, whereas when you take your gaze towards the left you’ll find the usual set of volume controls and an extra button. Either Samsung has decided to do away with the power button or (crosses fingers) we’re finally getting a Galaxy flagship without a Bixby button! If this does pan out in our favor, it confirms just one thing – Samsung is finally laying down its sword with Bixby and we couldn’t be happier.

Here’s another minor detail that’s quite polarizing- Samsung is ditching their horizontal camera cut-out for a more conventional vertical layout. I personally feel this will result in the Note 10 losing some of its character, especially because the vertical layout is also seen on Samsung’s A-series of phones. Add to that the fact they’re using gradient backs this time around, we fear people will mistake it for…well… a Huawei handset.

Apparently, we’re also losing the headphone jack. The mightiest survivor among them all, we hope you rest in peace. If Samsung has finally decided to forego the jack with the Note 10, it means without a doubt that next year’s Galaxy S11 will miss out on it too. Why Samsung, just why?

That’s all we have for you folks today! As and when leaks surface you can count on Techquila keeping you updated. Stay tuned!

This is How the Google Pixel 4 Will Look Like, Pictures Leaked

Redmi K20 Pro – Should you upgrade from the Poco F1?