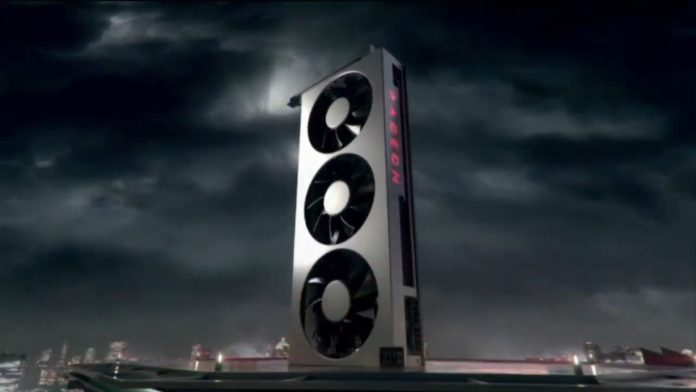 AMD released their Radeon VII graphics cards a month back and although stocks are mostly empty, you can still manage to score the 7nm GPU if you buy a whole desktop rig. Multiple retailers in the US are offering the card for decent prices if you purchase the complete PC along with it. This post however, is dedicated to an RGB waterblock, one of the first ones to be released for the Radeon flagship. Meet BYKSKI’s A-Radeon VII-X waterblock for the world’s first 7nm GPU.

Like most waterblocks for high-end parts, BYKSKI’s product also comes with full-fledged RGB support that is compliant with most motherboards including the ASRock RGB LED, ASUS Aura Sync, MSI Mystic RGB and Gigabyte RGB Fusion technologies. This basically means that you can sync the RGB lighting on the block with the one on any of these motherboards.

The block has an acrylic cover giving it a transparent look and allowing you to see the water-flow and the insides of the card quite clearly. The BYKSKI A-Radeon-VII-X leverages a nickel-plated copper base which regulates the flow over the GPU and VRAM. The waterblock also features proper channeling to keep the MOSFETs and the power delivery cool. The thermal rating is pegged at 401W/mK.

As already mentioned, this is the only waterblock available for the Radeon VII at the moment. You can buy it from Taobao for approximately $100 or from Primochill for $140. EK Waterblocks is the other major vendor promising waterblocks for AMD’s 7nm GPU but they aren’t available for purchase as of now.