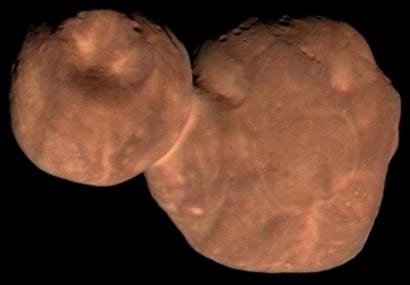 The New Horizons spacecraft made a flyby on New Year’s Day 2019, by an asteroid. The special thing about this asteroid is that it is the farthest object to having ever been visited by a spacecraft. Situated 1 Billion miles away, farther than Pluto, this asteroid is red and looks somewhat like a peanut. Named Arrokoth, it sits in the Kuiper Belt, home of thousands of asteroids and dwarf planets.

Scientists are still astounded by the discoveries that the New Horizons spacecraft has made on Arrokoth. So much so that they are left debating whether this encounter with the asteroid is more important than the spacecraft’s encounter with Pluto, the actual mission. The spacecraft has collected myriads of data that it is still sending back to earth, a month and a half after the actual encounter. The asteroid seems to have had particular information related to the early stages in the life of our Solar System.

The asteroid lies at a very important position. This is where the clouds and particles of the Solar system end, forming what is called a Solar Nebula. This place is so far away from the sun that the temperatures are nearly at absolute zero. This facilitates the preservation of states of objects in a time-capsule manner.

The observations made at the asteroid have helped in providing proof for one of the competing theories behind the formation of the Solar System. The smooth and undisturbed surfaces of Arrokoth hint towards the cloud collapse theory, which argues that the early particulate Solar System had an uneven distribution of mass, which led to the gravitational collapse and the formation of the celestial bodies.

The New Horizons mission, which was launched in 2006, has already delivered more than what it promised. Now the scientists are conducting a telescopic survey of the Kuiper belt to see if there are any asteroids in range of the spacecraft in the last-ditch attempt to get some more data out of this mission.