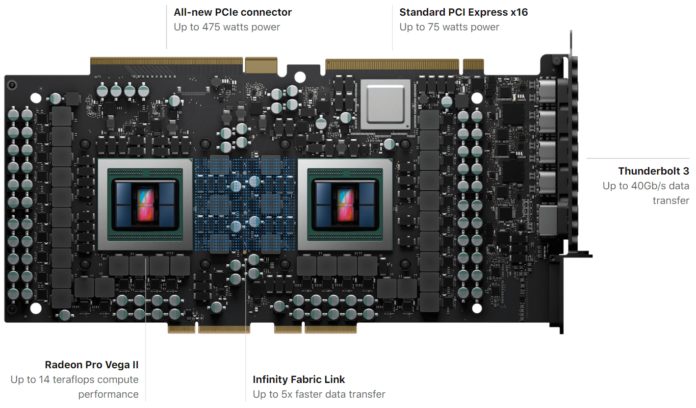 AMD recently launched the Radeon Pro Vega II graphics card that will debut in the newly announced MacBook Pro workstation. The GPU features the complete Vega 20 die with 4,096 shaders (64CUs) paired with 32GB of HBM2 memory and a 4096-bit wide bus, resulting in a massive bandwidth of 1TB/s. The cores run at a maximum frequency of 1.7GHz, with a base clock of 1.57GHz. The memory is clocked at 800MHz, and the super-wide bus makes up for the low speed, one of the signature features of HBM memory.

This particular screenshot was shared by well-known Twitter chip leaker, TUM_APISAK. It looks like the 3DMark specs sheet of the Radeon Pro Vega II. The driver calls the GPU, Radeon Pro Vega 20 GL XTA, while the rest of the specs are as disclosed at Apple’s keynote. This workstation graphics card will probably hit the market soon enough and complete with the likes of NVIDIA’s Quadro, and ought to cost just as much if not more.