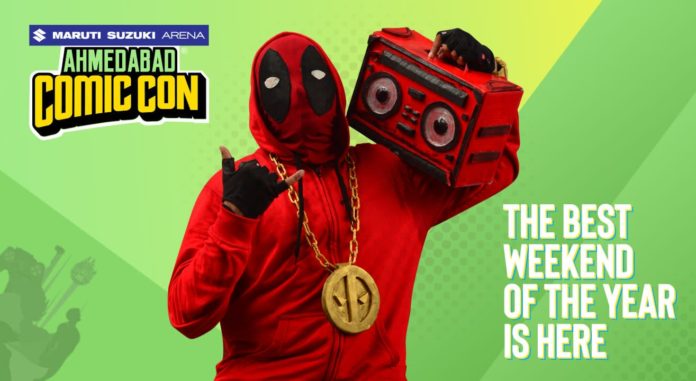 Ahmedabad will be hosting its first-ever Comic Con on February 1st and geeks in the city can’t be happier. One of the biggest pop-culture events in the country, Comic Con Ahmedabad will be held for two days on 1st and 2nd February 2020 at the Gujarat University Convention and Exhibition Centre.

Comic Con came to India in 2011 and was first hosted in Delhi. It has a come a long way since then with multiple events in different cities throughout the country, and for Comic Con Ahmedabad, they have partnered with Esports Club to create an exclusive gaming experience zone.

The gaming zone called the Esports Club Arena and powered by LG Ultragear is a dedicated gaming experience and esports zone created in partnership with leading gaming brands. It’s an initiative focused on developing India’s esports community – in addition to the complete Comic Con experience which includes creators, performances, experience zones and geekiest shopping from leading brands, creators and artists across India and the world.

The gaming-focused zone has been designed to create various fun and engaging activities for the attendees and gaming fans alike. The Esports Club Arena powered by LG Ultragear will feature booths from industry leaders like LG, ZOTAC Gaming, ACT Fibernet and World of Warships, amongst others, offering fans a peek into the latest and greatest gaming equipment and tech. Fans at the event will have an opportunity to play the latest games on the best hardware including premium gaming monitors from LG, showcasing the company’s wide range of products that feature 4K displays and high refresh-rate devices, making them the perfect choice for all types of games and gamers.

Players can also to take part in multiple daily tournaments featuring games like FIFA 20, Tekken 7 and Counter-Strike Global Offensive with prizes up to INR 15,000 up for grabs across each title every day. The Esports offering doesn’t stop there as the event will also serve as the finale for TEC’s Tom Clancy’s Rainbow Six Siege Tournament with a prize pool of INR 1.5 lakhs up for grabs.

TEC partners for the Esports Club Arena include:

In addition to a peek into the latest and greatest in gaming, attendees can expect to get exclusive offers from partners available on ground and online, product walkthroughs, game demos, exclusive tournaments, and even a chance to win some merchandise.

Passes start from INR 599 and are available on www.comicconindia.com