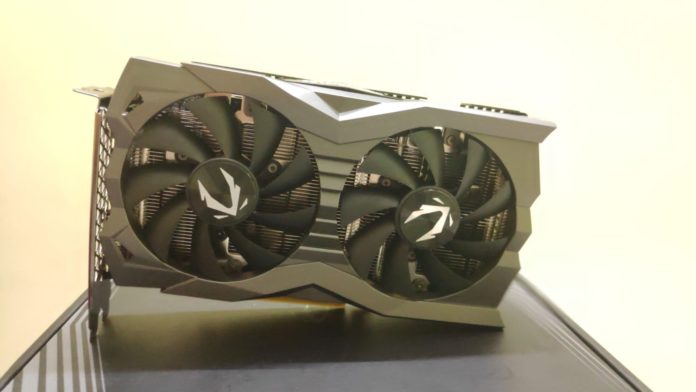 NVIDIA complemented its GeForce RTX 20 series cards with the release of the GTX 16 lineup. Based on the same architecture as the former, the GTX Turing cards are a cost-efficient solution for the mid-range market which till late had been dominated by AMD’s aging Polaris offerings. With the duo of the GTX 1660 and the 1660 Ti already giving team red a tough time, we expect the 1650/1650Ti cards to be the final products in the Turing lineup (although there have been reports of an RTX 2070 Ti, so you can never be too sure). In this post, we review Zotac’s variant of the GeForce GTX 1660.

The Zotac GeForce GTX 1660 AMP is a dual-slot card requiring an 8-pin power connector but despite that, should fit into small form-factor PCs without much trouble. It’s identical in size and built to the Zotac AMP variant of the RTX 2060 with the same dual fan heatsink, albeit with a darker color scheme.

Since the GTX 1660 begins to hit its limits at the maximum visual settings at 1080p itself, we decided to exclude the 1440p and 4K testing for this particular SKU. All the games were tested at the ultra quality graphics preset:

You can see the same trends throughout the duration of the benchmarks, the GTX 1660 is on an average 30-40% faster than , with the difference growing and shrinking considerably in titles like The Witcher 3 and The Division 2, respectively. This can be attributed to the latter being an AMD partner while the former an NVIDIA Gameworks title. The delta between the GTX 1070 and is much smaller in newer games, and although many would call this a result of NVIDIA gimping the card via driver updates, we checked with older drivers and found identical performance figures.

The GTX 1660 makes AMD’s Radeon RX 580 obsolete and despite the latest price-cut, I’d recommend paying an extra dozen bucks for the extra 30-35% performance and the substantially better thermals and TDP that come with it.

I’ve had an especially bad experience with Zotac cards when it comes to overclocking with most of the GPUs barely even tolerating a +100 on the core, but this one fared comparatively better with an offset of +125 and 500 on the core and memory, respectively after maxing out the power and voltage limits.

For whatever reason, the Zotac GTX 1660 AMP didn’t play nice with Afterburner and I was forced to use Zotac’s proprietary Firestorm utility (whose UI still makes my head hurt, btw), and after the usual dose of yelling it got the job done.

The gains due to the overclock vary greatly depending on the game. 2 gets an uplift of 15% to 75 FPS, while Wildlands and Exodus barely see any improvement. Shadow of War sees a mild increase of approximately 10%, bringing the average frame rate up to 72.

The GeForce GTX 1660 marks the latest move in NVIDIA’s campaign to capture the mid-range GPU market from AMD. So far, the GTX Turing lineup has been more than successful on that front. Zotac’s cards may not be the best when it comes to aesthetics or thermals, but they are certainly the cheapest and most widely available. The extended 5 years of warranty is an added bonus. As I’ve said a hundred times before unless Navi lands I’m not recommending any AMD GPU, and from what I’ve heard, even the 7nm parts aren’t going to be anything special, and as usual, AMD will make up for it by making a bunch of price cuts here and there.

Metro Exodus Review: The Fallout We Never Thought We Needed