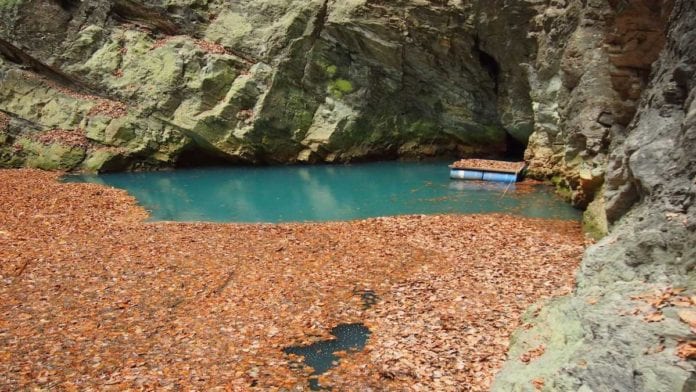 The Hranicka Propast or Hranice Abyss located near the town of Hranice, Czech Republic is known to be the world’s deepest freshwater cave and it just got a whole lot deeper. A new study published in Journal of Geophysical Research: Earth Surface, estimated it to be at least 1 kilometre (3,280 ft) deep.

Previous research on the Hranice Abyss

Divers have been exploring the Hranice Abyss for decades. A team of explorers, led by Polish cave diver Krzysztof Starnawski, discovered it to be at least 404 metres (1,325 ft) deep, making it the world’s deepest underwater cave. It is followed by Pozzo del Merro in Italy which is 392 metres (1,286 ft) deep. Starnawski said he felt like a “Columbus of the 21st century” to have discovered the cave.

Starnawski dived to 200 metres and positioned a remotely operated underwater robot to reach a further 204 metres, the total length of its cord. “It was as deep as its rope could go, but the bottom was still nowhere in sight,” the Czech Speleological Society said in a statement. The Hranice Abyss is much deeper, the explorers added. He said that diving in there is a challenge, because of its muddy areas and a water temperature of 15-degrees Celcius (59 degrees Fahrenheit). The mineral composition of the water damaged equipment and exposed skin both. “But that is the only price to be paid for this discovery, and it was worth paying,” he said.

Along with providing a new depth estimate, the team also performed various tests to see how the system was formed. Most caves form by a top-down process in which water from the earth’s surface, slightly acidic from dissolved carbon dioxide, makes its way underground through soluble rock like limestone, dissolving the rock and creating cracks that widen over time. However, deep caves can also be formed by a bottom-up process, where acidic groundwater heated by the Earth’s mantle slowly migrates upwards.

Findings of the latest study

Geologists have long believed that Hranice Abyss was formed by a bottom-up process, like other deep caves because its water contains carbon and helium isotopes that come from deep within the earth. But the results of the new study suggest that Hranice Abyss was formed by a common top-down process. The researchers say, it took place before the Mid-Miocene transgression, when the sea levels rose and it was flooded and, the carbon and helium isotopes could be the result of the upwelling of water at a later point. They said that scientists may need to reconsider their views on how these deep cave systems form.

In the latest study, scientists from the Czech Academy of Science used a combination of geophysical techniques including electrical resistivity tomography (ERT), gravity, and seismic methods to assess the underground cave from above. Using this, they built up a rough map of the cave, which shows that it is at least 1 kilometre (3,280 ft) deep, which is far deeper than previous estimates. The team said that the formation model they created for the Hranice Abyss could be applied to other flooded cave systems globally.

However, these are just the latest estimates. As better scientific techniques and processes become available, the researchers will be able to give us a more accurate number, which will no doubt be even deeper than the one currently available.

Francesco Sauro, a geologist at the University of Bologna who was not involved in the study, stated: “It’s a good example of how you should do things.” He further said, “It could be that other caves have the same story, or that [similarly formed] caves could be even deeper.” Sauro also added, “We don’t exactly know what could be down there.”