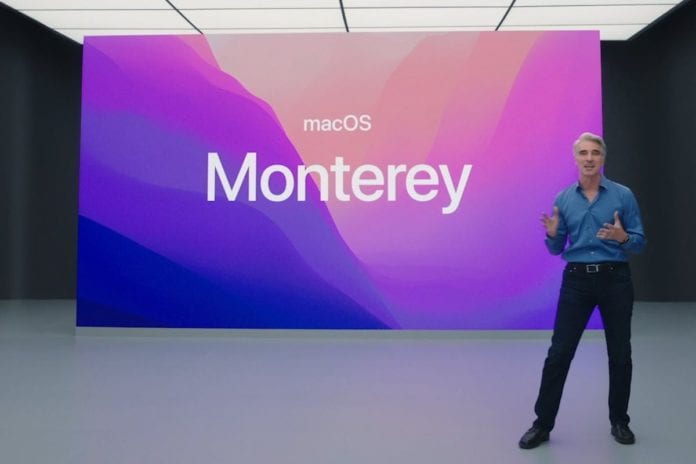 Today, the Cupertino giant announced the next iteration of macOS – Monterey, and it’s all about making the ecosystem seamless. macOS Monterey is getting the new FaceTime features, Quick Notes, Focus, and many other new features.

The latest iteration does not bring any design overhaul, but it changes how you interact with other Apple devices, especially iPads. We’re speaking the Universal Control on board which is Sidecar on steroids. So, Universal Control allows you to seamlessly move your cursor and files between a Mac and iPad, and it’s as simple as just putting your iPad near your Mac.

Federighi shows the Universal Control in action, and it’s just seamless. Imagine you’re editing a video or any document on your Mac, and you can drag and drop an image or video from your iPad without connecting any wires. Well, AirDrop was crazy fast, but Universal Control is just mind-blowing.

macOS Monterey also brings the AirPlay to Mac after nearly a decade of its inception. Using AirPlay, you can play audio or video on your Mac from an iPhone or iPad. So next time, you can rick and roll on your cousin’s Mac from your iPhone.

Another new addition to macOS is the Shortcuts app. The Shortcuts app on macOS Monterey is not much different from its iPhone counterpart, but it comes with Mac-specific commands. The Shortcuts will be coming with some pre-built actions to help you out with some of the everyday tasks. However, users can also create their own actions and customise pre-built shortcuts to match their needs. Moreover, users will be able to import existing Automator workflows into the Shortcuts app. The shortcuts will be accessible throughout the macOS, and you can also use Siri to get shortcuts to work.

We were not that right about the redesign bit since Safari is getting a design overhaul with the Monterey, reminiscent of Firefox. The tabs now have a modern look, with the address bar integrated into the tab itself. The new design is meant to offer you more reading space and better tab management with Tab Groups. With Tab Groups, you can save the tabs you want, and it gets synced across Mac, iPhone, and iPad.

Quick Notes is also coming to macOS Monterey. With Quick Notes, users can instantly note down whatever comes in their minds without opening the Notes app every time. One can also mention people in the notes and see edits in the Activity View. In addition, users can find their notes in Tag Browser and tag-based Smart Folders.

The macOS Monterey also brings the Focus. This feature allows you to create a DND sort of profile on your Mac so that no one disturbs you when you’re working on some important work of yours or playing Fortnite with your friends. The Focus syncs across all your devices and also intimates others when you are not available.

The new FaceTime features announced during the iOS 15 are also coming to the macOS Monterey, including Spatial Audio, Voice Isolation and Wide Spectrum. In addition, SharePlay and Shared with You will also be making their debut on macOS Monterey alongside the iOS 15 and iPadOS 15.

The Maps on the next iteration of macOS will be getting a similar overhaul as the iOS 15 and iPadOS 15. Live Text is also coming to the macOS, which allow you to copy text from images. In addition, the iCloud+ and Mail Privacy Protection will also be coming to the Macs with the upcoming macOS update, and there are some new accessibility features to make Mac accessible for everyone. Furthermore, AirPods Pro and AirPods Max will support Spatial Audio on Mac with M1 Chip in the macOS Monterey.

The macOS Monterey is expected to arrive later this year. However, you can try out the beta build to get a taste of these new features.