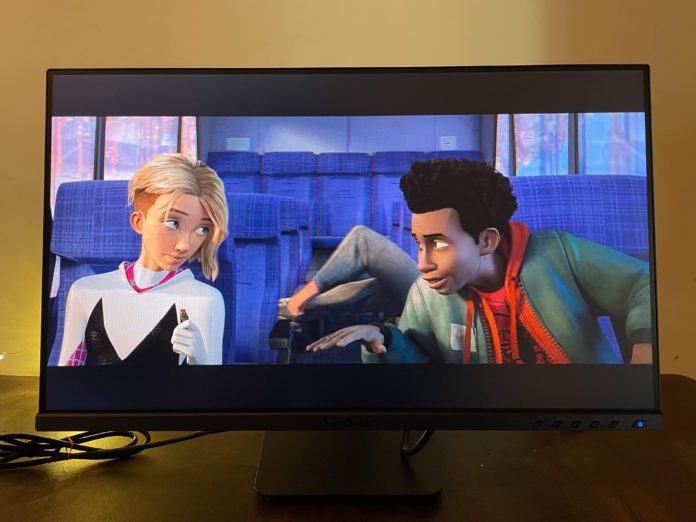 The ViewSonic TD2445 monitor is an enterprise monitor, but it surely can find its place in your work-from-home setup with its clever design. The TD2445 is a touch-screen monitor especially meant for business and educational purposes. The monitor comes with a 23.8-inch FHD+ IPS LCD panel supporting multi-touch gestures and stylus input, with an innovative stand. But does these things make it worth spending Rs 49,600 on ViewSonic TD2445 monitor? Let’s find out in our full review.

Here’s everything that comes inside the package.

The 23.8-inch panel on the TD2445 is an IPS LCD panel offering a 1920×1080-pixel resolution at a 16:9 aspect ratio. The panel is housed in a matte black body with minimal bezels on sides – a huge benefit if you are into a multi-monitor setup. The IPS LCD panel displays vibrant colours with enough brightness. However, due to its poor contrast ratio of 710:1, the blacks look greyish, which doesn’t look that good while watching a movie or playing games.

The 23.8-inch IPS LCD panel covers around 94% of the SRGB colour gamut and 73% of the DCI-P3 colour gamut – making it fine for business use and even for binging movies or shows. There’s no need for further fine-tuning colour accuracy, and even the colour temperature was perfect. So, you can use the monitor with its factory settings. However, the 2W dual stereo setup was a disappointment, so it’s better to keep an external speaker handy if you plan to use this monitor for media consumption.

The IPS LCD panel on the TD2445 is a 10-point capacitive touch screen with support for gesture-based multi-touch finger control, meaning it can detect as many as ten fingers at once. ViewSonic packages a stylus and an additional tip in case you lose one. We didn’t play a lot with the touch gestures, but it was responsive and fun whenever we used it.

One of the most exciting things about the TD2445 is its stand, one of the most innovative monitor stands we’ve ever come across. The stand has a few extra hinges than any other standard monitor stand, giving it some extra flexibility. The stand only provides height and tilt adjustment so that you can adjust the monitor’s position vertically, and it’ll always face the front; there’s no way to pivot it horizontally in any other direction. You can also use a VESA mount if you want, but we don’t suggest that.

Also Read: Xiaomi 11i Review: HyperCharge For The Masses

The connectivity options present on a monitor matter as much as its panel, and we are happy to say that ViewSonic TD2445 impressed us with its array of input and output ports. The TD2445 comes with an HDMI port, a USB-C port with support for DisplayPort, a pair of USB Type-A ports, and two DisplayPort connectors. You can connect it to your laptop or an external projector using the DisplayPort. Also, you can use the DisplayPort to connect up to 4 monitors in a linear series if your laptop or PC supports Multi-Stream Transport (MST). The ports can be easily reached despite facing downwards, thanks to TD2445’s extra flexible hinge. Then, you get two downstream USB ports on the monitor’s side to easily connect any external storage device.

On the bottom bezel of the monitor, you’d find an array of buttons near the power button. As the name suggests, the power button turns on or off the monitor, and five buttons on its left can be used to adjust the different settings. The navigation isn’t easy, and sometimes you can end up frustrated, but it becomes a little less irritating after a while.

The ViewSonic TD2445 is an excellent monitor, but it’s a hard sell for its price. For a retail price of Rs 49,600, ViewSonic TD2445 is more of a business-oriented piece of hardware since no one’s looking for a monitor for their home is going to spend that much. For its price, the monitor offers many features that could be quite useful for offices – an innovative stand, daisy-chaining it with other monitors or projectors and touch screen. So, if you are out there in the market looking to buy a touch screen monitor, then ViewSonic TD2445 could be a great option for you.