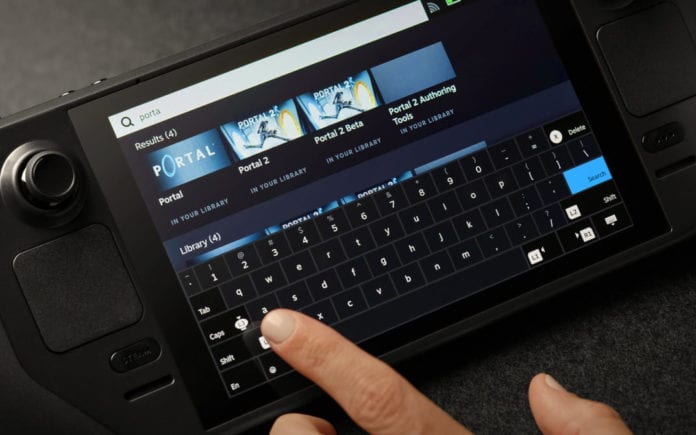 The new Steam Deck Handheld Console will be able to run your entire Steam library in a nifty manner for a low price of 399$.

If a new Valve Steam Handheld Console was in your Bingo card for the year 2021, it seems like you’ve won a prize. What was previously known among the informers as “SteamPal” is now a real, tangible console that you can own as soon as December this year.

The console boasts a multitude of hardware and software specifications that allow you to run your entire steam library without using a cloud. The console runs on an APU designed by AMD. The APU has capabilities of running at up to 3.5GHz, and the in-built GPU caps out at 1.6 GHz, packing a force of 1.6 teraflops.

The Handheld Console also comes with a 16 GB ram, a 7-inch screen that is 0.8 inches larger than the standard version of the Nintendo Switch, and a Micro SD card slot to increase its storage. The screen offers a 60 Hz refresh rate and a resolution of 1280×800. The Steam Deck is WiFi compatible and runs on both 2.4 GHz and 5 GHz networks.

The Steam Deck will be coming in 3 different storage options, with the higher storage models still having some more added features on top of what is already there. The 529$ version adds a 256 GB SSD and adds an “exclusive Steam Community profile bundle” on top of it all. The highest-priced version costs 649$ and includes a 512 GB SSD, which Valve has called “high speed” despite being a PCIe 3.0 drive. This model also contains anti-glare glass as an add-on.

Depending upon the game you are running, the Steam Deck can give you two to eight hours of gameplay time. There are 3 USB ports, one of them being a USB 3.1 and the rest being USB 2.0. It also contains front-facing speakers, dual microphones, and a headphone jack for your audio needs.

The Steam Deck will be able to work as a normal computer, too, meaning that you can install other software on it to watch videos and browse the internet.