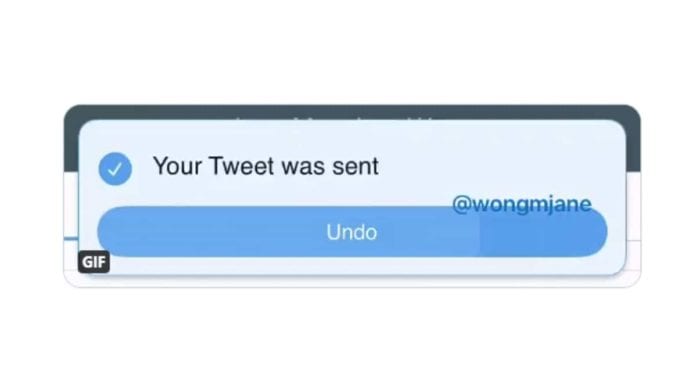 Ever been in a situation where you have tweeted something, but later, you found some typos in that, and now you’re scratching your head because you can’t edit it, and you have to delete it, write it again to save yourself from getting trolled.

Personally, I have been in such a situation, and ever since the day I started using Twitter, I wanted an edit button. Still, the birdie app wasn’t interested in that until now, as the microblogging platform is testing a new feature that could save you some tears.

No, I am not talking about the edit option, but Twitter has been working on a “undo send” feature that could solve our problem to some extent. Researcher Jane Manchun Wong first spotted the “undo send” feature, giving us a little sneak peek into its working.

It’s not something we were looking for, but atleast it will provide users with an option to get rid of their typos before their tweet hits the feed. The ‘undo send’ feature works as a timer that appears after a user shares a tweet, which lasts around five to six seconds before your words are out there.

At least, a preview of the tweet would be a great addition to read their tweets and correct it if there is any mistake instead of just pressing the ‘undo tweet’ button out of the blue.

We expect the feature to roll out to some select users in a near-future before it reaches mass so that we can have an exact idea of how much useful this ‘undo tweet’ feature will be.

To recall, Swiggy and Tomato have introduced the same kind of feature earlier, which gives customers a minute to cancel their orders, and Twitter’s new feature is quite similar to Twitter’s undo send feature. At least we are getting something if not what we wanted.