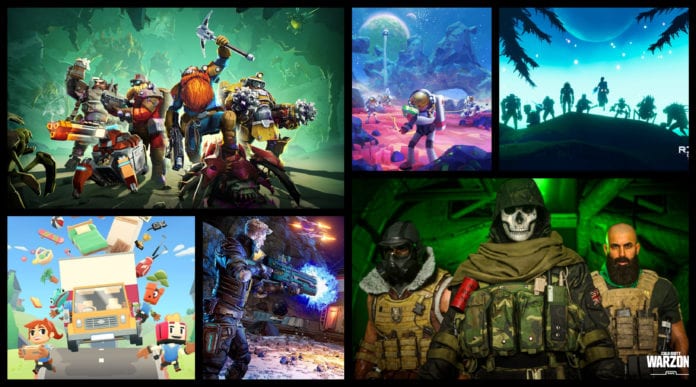 With everyone locked up in their homes, digital entertainment, or rather specifically videogames, are one of the best escapes one can have from this isolation. From growing a farm together to taking down the boss together with your friend, what’s better than the feeling of accomplishment that co-op games provide, especially in these times? So here’s a list of our favourite co-op games that we’ve curated for you to hop in with your friends and have a good time.

Note: We’ve tried to include more lesser-known titles that may have gone under your radar. Also, keep in mind the list isn’t sorted in a specific order (can’t really compare a wholesome farming simulator with a crime-shooter now, can we?)

Astroneer is a relaxing interplanatery exploration sandbox where you can explore through different worlds, reshaping and building custom bases. You can group up with upto 3 other players and work together to build massive industrial bases or even create fun games in the extensive creative sandbox. With a $20 price tag, it’s a must-play for space exploration lovers and also for those who enjoy crafting, adventure and resource management. The core elements are really well made in this game and offer a solid experience for hours to come.

Deep Rock Galactic just launched out of a more-than-2-years-long Early Access last week. You play as dwarves employed by a mining company that strips alien worlds of their riches. Very much like Astroneer, you explore procedurally generated caves, but filled with not-so-friendly alien creatures. You can shape the caves as you want with your mining arsenal. There are 4 different classes to choose from, each having their own additional special abilities. Deep Rock is an absolute blast with friends, definitely not something you would wanna let go under your radar.

Another game with insanely good reviews. With a 96% Overwhelmingly Positive rating averaging from 60k reviews, Risk of Rain 2 makes you wanna go for yet another round, no matter how many times you die. The basic formula of the game is simple – you and your team of upto 4 crash onto a retro-styled planet, fighting never-ending waves of increasingly-challenging enemies to grab the best of loot. The roguelike came out a year ago into early access, and is set to launch into 1.0 this August.

Warzone is honestly one of the best Battle Royale shooters out there. In March, Activision turned their Modern Warfare reboot into another huge success by launching a standalone, completely free-to-play 150 player BR based off the foundations of the already-pretty-amazing gunplay and visuals of the reboot. It even supports cross-platform matchmaking, so you can parachute into Verdansk with your console comrades without a worry. Warzone reached over 50M downloads in the first month. That figure itself says a lot about the popularity of the game.

Overcooked 2 is a chaotic and frantic management game that throws you and your team of upto 3 into ridiculous kitchens to work together to feed hungry undead breads. You cooperate with your fellow cooks in hectic tasks like chopping, cooking, baking, grilling and serving, while obviously messing things up. You get to yell at your friends. 10/10. It supports both couch coop and online multiplayer, so you can easily join in for some hilarious moments with your pals. Definitely one of the best couch co-op games around.

Well well, where do we start with this one… Stardew Valley is simply a piece of art, an absolutely beautiful one that you wouldn’t wanna put down once you start playing. Don’t let the pixel artstyle fool you. If you like the relaxing cutesy atmosphere of Animal Crossing, you’re certain to sink hours into this beautiful country life simulator. This one-man labor of work shouldn’t be confused for just a farming game. You can mine, fish, kill monsters, build relationships with the villagers, marry & have a family, oh and also have pets. Welcome to Stardew Valley. With over 200K reviews and a overwhelming 97% positive rating, you wouldn’t have to think twice before throwing in your wallet for this gem.

It’s the kind of game you get onto in a chilly morning and don’t even realise until it’s dusk. The perfect non-stress game for these stressful times, an absolute must-play.

Rockstar’s magnum opus is undoubtedly the biggest success of the decade. The rich open world of Los Santos has a lot to offer – from bicycle races and tennis, to pulling off heists, going guns-blazing robbing banks with your crew. Seven years after launch, GTA Online is pretty much still on top of most charts while constantly receiving new updates and additions. It’s easily one of the best games to get lost in, especially now, as everyone grabbed it for free on Epic Games Store.

Coming from the same Publisher as Overcooked, Moving Out is yet another hilarious game where you and your pals work as “certified Furniture Arrangement & Relocation Technicians” taking on moving jobs across the town. Break doors, windows, toss couches through; work together to get the stuff in the truck as soon as possible. Moving Out came out this April, and also has a demo on Steam, so be sure to check it out!

You and your crew are cast into procedurally-generated ships that you need to turn this into a livable space by recycling alien fluids, finding resources, and keeping the whole place as tidy as you can. Out of Space puts you in a similar situation as Moving Out, except that this time you’re actually managing the place instead of wrecking it. Easy choice for some quick fun with the homies.

2K Games’ looter shooter franchise is one of the most loved co-op titles out there, where you can play through the entire campaign solo, or with a party of upto 4. Borderlands’s story revolves around a group of four “Vault Hunters”, who travel to the distant planet Pandora to hunt down an alien vault. It’s definitely one of the hottest shooters out there currently that you can sink hours into, without even realising.

Borderlands The Handsome Collection is currently free to keep on Epic Games Store, making it one of the most apt titles in this list currently. If you’re already done with those two, Borderlands 3 is currently a mere $10 during the Epic Mega Sale as well. Anyhow, if you haven’t gotten into the series till now, this is definitely the time.

So, this rounds up our list of our personal favourite co-op games. Obviously, there are many more gems we love but couldn’t make their way into this list, but that calls for another one sometime. What other games do you think deserve being on the next one? Let us know in the comments!