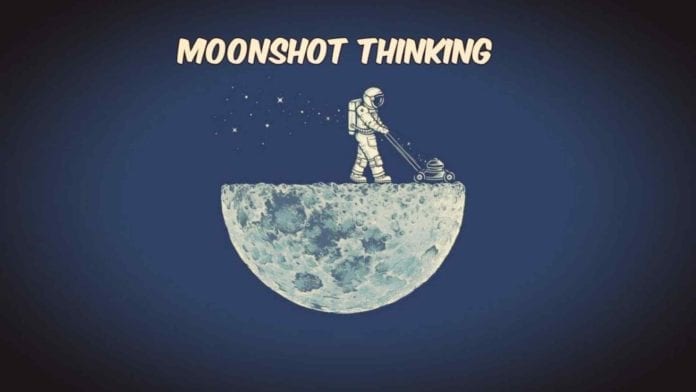 But there is more to it. Specifically pertaining to finding solutions to the big problems that seem impossible.

The day it all began was September 12th 1962. At the Rice Stadium in Houston, Texas, the then president of the United States, John. F. Kennedy, addressed a large gathering filled with American people. Millions of people watched the live broadcast, and it was even relayed to schools and universities, for the students to watch.

In his speech, Kennedy spoke of space as a new frontier, invoking the pioneer spirit that dominated American culture. He emphasized the freedom enjoyed by Americans and impressed upon them to choose their destiny rather than have it chosen for them. More importantly, he promised to put an American on the surface of the moon by the end of that decade. The concept of the American dream to have a life full of opportunities for everyone, and achieving highest aspirations, had existed for decades. It was common for industry innovators to have big ambitions to realize their vision.

But this was a different ballgame. No one at that time, including the scientists and engineers at NASA, had any idea or experience of sending humans to a celestial body, over 239,000 miles away. Hidden in the words of Kennedy, lay the absurdity of the claim; There were no protocols, no rule books or manuals to follow, and no history to count on and learn from.

Kennedy’s dream was realized in July 1969, when astronauts Neil Armstrong and Buzz Aldrin set foot on the Moon. But it served an alternative purpose as well, marking the beginning of a new paradigm of thinking, aiming for exponential growth, known as moonshot thinking.

What is Moonshot Thinking?

Moonshot Thinking is when you choose a huge problem, such as climate change, and propose to create a radical solution to the problem using disruptive technology. For this to happen, you have to abandon the idea of creating a 10% incremental improvement and focus on a solution that will bring ten times (10x) improvement.

This counter-intuitive approach is actually more beneficial because when you’re working to make things 10 per cent better, you inevitably focus on existing tools and assumptions, and on building a framework based on an existing solution that many people have already spent a lot of time thinking about. But when you aim for a 10x gain, you lean instead on bravery and creativity – the kind that, literally and metaphorically, can put a man on the moon. Kennedy understood the idea behind the challenge: bigger challenges create more passion, and they inspire a whole generation of people who make it their life’s purpose to solve it.

“If you are not doing some things that are crazy, you are doing the wrong things”, said Larry Page, the founder of Google and its moonshot factory X, which has been the brainchild for a majority of new ideas that we see today; self-driving cars, drone-based delivery, internet connectivity using helium balloons, and a lot more.

It is definitely a gamble, investing in such seemingly impossible moonshots. A large number of these ideas fail and projects get killed, but for these ‘moonshot pirates’, failure is a badge of honour, and a mandatory part of their daily job, in their quest to conquer the world.

The current pandemic has demonstrated the need to be better prepared to handle challenges, and we need to keep pace and get ahead of them. Incremental growth will not be sufficient for that, and the right way is to shift focus from 10% growth to 10x growth; by taking that moonshot.

Moonshots are the gray area between audacious projects, and pure science fiction.