The Reality of Our Times

I was scrolling through my Facebook news feed the other day, and I came across a video by The Huffington Post titled “Changing The World Starts With You”. The video wasn’t very long, just around 2 and a half to 3 minutes, and it basically was Jay Shetty, a vlogger who works with The Huffington Post, talking about how we humans live in a sort of ‘paradox’, which defines every action that we take and questions whether we actually thrive off this paradox. I watched the video and was pleasantly surprised at the amount of truth in it. However, I didn’t dwell on it, closing it and scrolling through my news feed like I always do.

And yet, it always stayed in my mind. The things he said seemed true yet false, and the contradictions enraptured me. I’ve watched it again and again trying to find flaws or holes in this theory he proposed, as it seemed weird to me that we live our entire lives based off many different paradoxes. Jay explains in the video that the core theory of the ‘paradox of our age’ was first propounded by the Dalai Lama, and he provided instances such as us having ‘wider freeways, but narrower viewpoints’, ‘more experts, but less solutions’, how we ‘have bigger houses but smaller families’, ‘more knowledge, but less judgment’ and other such examples. And so, after giving it a lot of thought, here I am to talk about what I think the paradox is and what it means for us – the human race.

The way the video represents the paradox is through isolation and loss in connectivity due to advances in technology and to an extent, this is the truth. Today, technology controls nearly everything we do. Post and letters have become obsolete, with text messaging platforms such as Whatsapp leading the way in terms of communication. In fact, these forms of communication and platforming have become necessities in daily life, with so many projects having pages on Facebook or having groups for planning on Whatsapp. College life has almost become integral to technology, with so many online lessons, resources, and papers being submitted and viewed by thousands on the Internet. Twitter is slowly becoming the go to source for news and developments happening throughout the world. Phones continue to grow and advance even more, with the recently released iPhone X even going so far so as to have facial recognition software, an impressive but certainly frightening concept. Even dating has been riddled with technology, with apps like Tinder setting up two people based off of common interests and roughly 500 characters and a couple of photos to express who you are and what you look like. Shopping for things has never been easier with sites like Amazon and Flipkart, and even websites like Bigbasket make shopping for groceries something you can do right from your home. Apps like Swiggy have been developed to bring food straight to your door, and services like Netflix, Amazon Prime Video, hotstar, etc. ensure that we stay up do date with the latest TV shows and movies.

The paradox of our times is how we have effectively shut ourselves in by making our lives easier and that despite being so well connected with everyone, whether they be in front of us or across the globe, we are only distancing ourselves from them and from actually living our lives to the fullest. By making life easier in the short run, we make it much harder in the long run. We spend more time indoors than we do outdoors, and when we do go out, many of the actions we take are dictated by the piece of tech we carry around with us at that time – be it a phone, laptop, video game console, etc. We don’t stop to think, we just act, we have lessened our morals and our values, and we are presumptuous and quick to assume a great deal of things.

The question I pose is this – do we, as humans, perpetuate this cycle ourselves? And do we derive a benefit out of it?

The question appears in the video too, as Jay asks whether this paradox is what makes the media, or perhaps television and journalism ‘interesting’ and he asks whether we feed off of it or live off of it. However, the question goes unanswered.

The answer, I think, is that we do indeed perpetuate it – not because of some masochistic desire to watch the world burn, but its because of who we are as humans. It’s in our very nature. We have an innate desire to seek the easiest route possible out of any situation. The problem is, a great deal of us do not think about the far reaching consequences of our decisions to make the present easier, and due to this lack of foresight, problems arise. This is what makes the human race so perplexing – the fact that we seem to have answers to all the universes most pertinent questions but we cannot realize something so simple and obvious. 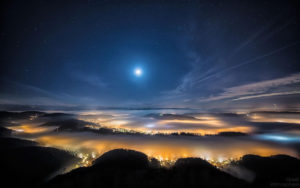 And thus, the paradox is born and continued. As for whether it makes our lives ‘interesting’, I feel that rather than saying it makes it so, a more appropriate characterization would be to say it is life itself. The way we live in this modern era is integrated with the paradox of our times. Let me give you an example: if you are told not to do something, it only increases your desire to do it more and see what happens, right? Or perhaps if you see a touching story on Facebook and decide to share it, but when a similar situation to exhibit humanity and kindness comes your way, with or without your knowledge, and you don’t show what you learnt from reading that story, you’ve perpetuated the paradox. The paradox lives in every action, every choice, every decision that we make. The paradox is what makes us human, and if that’s the case, then it doesn’t look like there is anything we can do to change it.

There is a way to halt the endless cycle, or at least, recalibrate it in such a way that it benefits us instead of mindlessly spurring us on to further the cycle. Surprisingly, the essence of the solution is present in the video itself – its to hit ‘pause’ and reflect on your life as it is. Open our eyes and see the world in all its splendor and grandeur, get a fresh, new positive outlook on life as we know it, and think about how life will be 10 or 20 years down the line. Once change starts, it is hard to stop, and the magnitude of change only gets bigger with the passage of time. Take a moment to consider the enormity of where you are, and think of how many have stood where you stand as the years have rolled by. It may be instinct to give in to the paradox of our times, we can change that by making sure we don’t succumb to the temptation to follow the routine. Instead, we should break away, and find something new and better for ourselves and for the world.

This world is changing, and day by day its becoming a scarier place to live in. Maybe global peace will not be achieved for another 20 or 30 years, but you can make a difference in your life right now. I don’t know if in 2000 or 2001, people envisioned the world we would live in now as the future they were expecting. In all those old movies involving time travel, years from the onset of the 2010’s were depicted as an era where mankind is happy and perfectly content with life, with both technological advancements like hoverboards, flying cars and whatnot, and the mentality that there are bigger things than what’s right in front of you at that time.

I shudder to think of their reactions if they were to step into our world.

- Advertisement -
Previous articleJustice League Review: Is There Any Hope For This Franchise?
Next articleBitcoins and Cryptocurrency: What is it and how does it work?

AMD's new Ryzen 3000-series processors don't seem to be compatible with loot shooter Destiny 2. The CPUs themselves are performing...

After having some terrible time with its Pixel smartphone, Google took a safe route for the Pixel lineup for the last couple of generations....

Intel has been experimenting with new machine learning technology, and using it on GTA V gameplay just made Los Santos a real city.