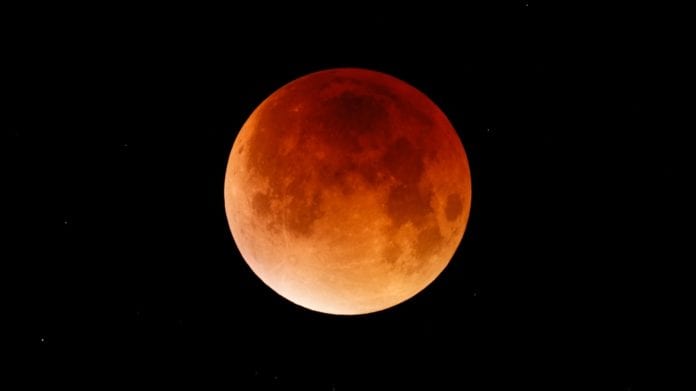 The Moon is constantly being studied for a variety of reasons. Of all the countries that are capable of undertaking missions of such complexity, a mission to the Moon is an absolute necessity. The major reason behind this is that researchers expect space travel to become so cost-effective that mining the moon for its resources could become a reality. It is often said that the first person to mine anything outside of Earth will become the first trillionaire, which is not a speculation. Many observation satellites are currently in the orbit of our natural satellite, hoping to learn more about it.

A discovery has been made while studying the data from ISRO’s Chandrayaan-1 mission that was launched in 2008. The new research suggests that the Moon is turning slightly red. The reddish colour was observed on the poles, where the researchers suspect that a reddish-black mineral form of iron named as hematite is being formed due to some phenomenon. For iron to turn into hematite, two key ingredients are required, water and oxygen. While it has a lot of iron, the satellite does not have much water, and oxygen is almost non-existent in its atmosphere.

The researchers who came across this are from the University of Hawaii. The phenomenon itself is very puzzling because the environment over there is the farthest from being conducive to hematite formation. The initial speculation suggests that the culprit could be Earth’s atmosphere.

The data that revealed this was recorded by the Moon Mineralogy Mapper (M3). The data showed a stark contrast between the poles and the rest of the surface. The Moon gets a steady supply of hydrogen from the Solar winds. However, this had to be ruled out as the reason because Hydrogen has the exact opposite effect of Oxygen when it comes to rust.

The only other option was the Oxygen from Earth’s atmosphere. However, to explain how it reached The Moon, researchers had to take the help of a 2007 study, which pointed out that Oxygen from Earth’s upper atmosphere could potentially travel through the magnetotail to the Moon. The Magnetotail also blocks 99% of the Hydrogen from Solar winds during certain phases of the Moon’s orbit, which could have counteracted the rusting process. The fact that the moon is moving away from Earth means that the rusting process is slowing down and might even stop one day.

The fact that water was only found on the poles means that rusting can only happen on the poles as well. In light of the new facts, we know more about our natural satellite, which could come in handy.