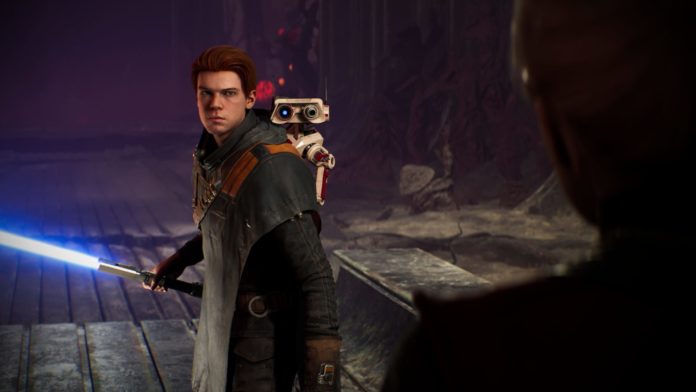 Star Wars Jedi: Fallen Order is an interesting game. While often people might use that phrase negatively, I tend to differ. A single-player Star Wars game made by the developers behind Titanfall/Apex Legends? How would that even get the greenlight by EA? But it did, and the game is out now. So, has Respawn struck goal again? Yes, they have.

Jedi Fallen Order is a 3rd person single-player action-adventure game. Notice that I didn’t use the term “open-world” there, as it really isn’t. While the game’s maps are huge, they’re not filled with meaningless quests. The game has a distinct vision of what it wants to be while taking a lot of successful traits from other games of this past generation. The combat is heavily inspired by Dark Souls, the traversal is similar to Prince of Persia and the storytelling reminds me Uncharted, in all the good ways.

Going into the game I really didn’t know too much about it, as it wasn’t marketed as well as EA probably should’ve. We didn’t know much about the game’s story or systems until much closer to release. This, I suppose, will hurt the game’s performance by a tiny bit. But the players who did pick it up on day one really seem to like it, much like I do. I’m a huge Star Wars fan and to see a brand new game in the series featuring a trained Jedi as a protagonist is a really happy feeling. Come to think of it, we haven’t had a single-player Star Wars game since The Force Unleashed II. Yikes.

As luck would have it, we are finally out of the hell-hole that EA had dug itself into in Battlefront II and hopefully, with Jedi: Fallen Order’s success, a new trend might emerge. Jedi: Fallen Order is devoid of any microtransactions whatsoever. There’s no in-game shop, no ads for buying the deluxe edition, no expansion pass, none of it. The game is simply the $60 experience that you pay for and frankly, expect. While we haven’t heard anything about post-launch DLC plans, I wouldn’t care much about it. For once, in a long time, it feels like the game’s purchase might just be complete the day it arrives.

Jedi: Fallen Order is set sometime after the events of Episode III: Revenge of the Sith. The Jedi Order has been effectively eradicated from the galaxy, with only a few of them still alive and in hiding. The protagonist, Cal Kestis is one of the aforementioned Jedi in hiding. But as fate would have it, he’s soon forced to be on the run from the Empire. Along the way, he (and in turn, you) must assemble the Jedi Order once again to take a stand against the Empire. Sounds right out of Star Wars? Yep. And for good reason.

The game takes a lot from Dark Souls and Uncharted when it comes to combat and traversal/storytelling. This is where all the pre-release promos come into play. You see, much like you, I too didn’t have much of an idea about what the game will play like while watching the trailers and gameplay videos. And truth be told, now that I am playing it, they don’t do justice to the final game. This is easily the best Star Wars game we’ve had in a long while. The lightsaber fights are epic, the soundtrack is reminiscent of John William’s iconic score, and the characters are likable. Instead of feeling like a corporate checklist, the game has a beating heart.

The combat here is something that took me by surprise. Eerily similar to From Software games, Fallen Order’s combat is a dance of dodges and timed attacks. Enemy hits are very fatal, and when you die you lose all your XP to that enemy. The game doesn’t have a conventional autosave and instead relies on meditation spots around the maps for the Cal to rest and spend skill points for extra abilities. If you’re one to flaunt style, you can also customize your lightsaber! The game follows a traditional leveling system, so you’ll constantly find yourself upgrading your gear and abilities.

Coming to traversal, reminds me a lot of the older Prince of Persia games. You know, wall-running, platforming, and even time manipulation with the Force. And it’s all for good reason. While many other games have lifted these gameplay mechanics for themselves, here it feels very natural as you’re a trained Jedi. Of course you can use the Force to pull/push enemies around, slow down moving platforms and do more with the abilities that I’ve yet to unlock. But that’s all I share about the game as I’m currently in the process of completing its near-30 hour campaign.

You can find my first impressions in video form here:

Our full review will be up soon. Stay tuned for that. In the meanwhile, you can read our previous coverage for Star Wars Jedi: Fallen Order and other stories here: