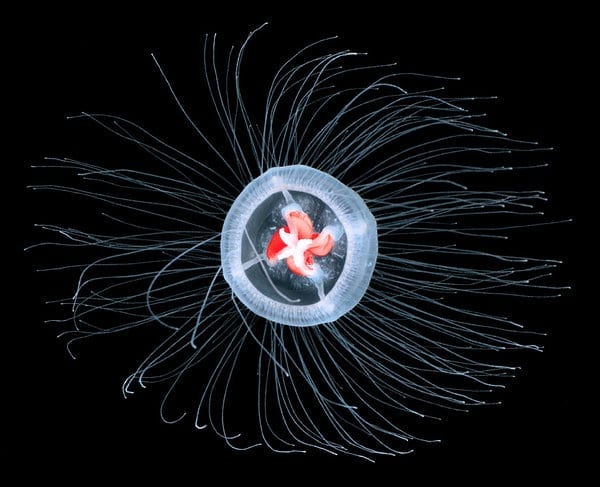 Immortality – one of mankind’s many fantasies. But is it just a fantasy, or is there more to it? While immortality is a fascinating prospect, it would create a fresh set of challenges as well. What are the things we could achieve with it?  First and foremost though, do you truly desire immortality? Irrespective of whether one wants it or not, with the help of the jellyfish Turritopsis Dohrnii, also known as the immortal jellyfish, scientists may have found a way to defeat death itself.

T. Dohrnii was discovered in the Mediterranean Sea in the 1880s. But it took the researchers almost an entire century to get acquainted with its special ability. When faced with starvation, physical damage, or an external threat, the jellyfish transforms itself into a polyp (its earliest stage of life).

The jellyfish has been observed off the coasts of Panama, Florida, Spain, and Japan and normally reproduces using the traditional method of sperm and eggs. But when it comes across adverse situations, it undergoes a process called Trans-differentiation, where it transforms its existing mature cells into a younger state. It is same process scientists use to turn stem cells into other human cells. During the young stage, the jellyfish attaches itself to a sturdy surface, converts into a blob-like form, and transforms into a colony of polyps. It’s the first known multi-cellular animal capable of reverting completely to a sexually immature stage after having reached full maturity.

However, being immortal doesn’t stop the jellyfish from dying due to unnatural causes. It can still be killed due to an illness or by a predator, specially during the vulnerable polyp stage. What protects it though, is having a transparent body of a small size (4.5mm across), which makes it hard to spot.

As is apparent from the discussion above, immortality doesn’t necessarily mean a stop to aging. However, the discovery of this unique ability has heated up many discussions among the scientists. The technology may help improve the quality of life during our twilight years. By studying the trans-differentiation capabilities of T. Dohrnii, researchers can further examine whether biological aging can be slowed down or reversed. It may be possible to follow the jellyfish’s lead by transforming our own cells into a younger state to reverse aging. Honestly, whatever this might lead to in the future, knowing right now, that something out there goes back and forth between its old and young self, is pretty mind blowing…