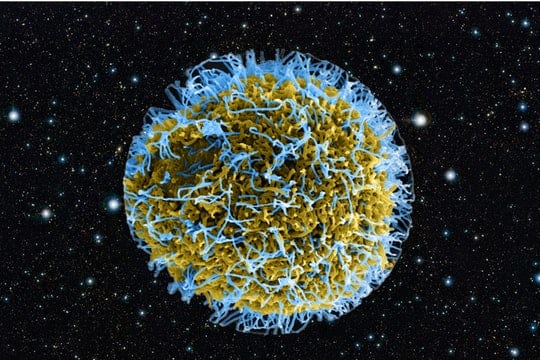 Viruses outnumber all other microbes on Earth, but what of them beyond our planet? Scientists are now hoping to find them elsewhere. Since the dawn of the Space Age, astrobiologists have worked to figure out if neighbouring planets harbour different life forms, specifically microbes like bacteria, archaea, and fungi. But now, the search for extraterrestrial life has landed on viruses. NASA’s Virus Focus Group is integrating the advancements in virology into astrobiology, the study of the origin of life, its evolution, and distribution in the universe.

Recent NASA-sponsored astrobiology workshops amass interest from scientists across borders and of varying levels of experiences. Kathryn Bywaters, a scientist with the Search for Extraterrestrial Intelligence (SETI) at NASA Ames Research Centre, says “It created a forum where people could express these ideas that they haven’t really been able to vocalize on the community level.”

Astrobiologists have long-considered the possibility of microbes living elsewhere in our solar system. It is predicted to be on Mars, Venus, and some of the moons of Jupiter and Saturn. A virus outside of a host takes the form of a virion. It consists of genetic material encapsulated in a protein shell. A few viruses have an outer lipid layer called an envelope. Viruses, although not technically “alive”, vastly outnumber all living organisms tenfold. According to estimations, if all of them were lined up end to end, the line would easily extend 100 million light-years.

They straddle the definition of life and can dramatically influence life on Earth. They can’t reproduce on their own, so they infect a host cell and hijack its machinery. This mechanism has led to decades of research debating if viruses should technically be considered living. Certainly, when one considers the whole virus replication cycle, it comes close to NASA’s working definition of life. It states ‘a self-sustaining chemical system capable of Darwinian evolution’.

Virology studies have historically studied its effect on human health. Scientists are now coming up with a more comprehensive image of all the other functions of this microorganism. There are certain viruses that modulate human, animal, and plant health, thereby giving them physical and chemical tools to resist pathogens or environmental stress factors.

Such viruses frequently co-evolve with their hosts and drive host evolution. It even includes catalyzing the development of the mammalian placenta. They aid in nutrient turnover in the oceans by breaking apart cells which then release nutrients essential to marine ecosystems.

Viruses are a peculiar case in nature, even when they are composed of the same molecules as living cells, such as proteins and nucleic acids. One unique thing that makes them different is that they are unable to reproduce independently. Instead, they need to hijack the cellular machinery of a host in order to replicate. Indeed, it would be a revolutionary advancement in astrobiology if one finds a viral species on Mars or say a Saturnian moon for that matter.

According to Kenneth Stedman, a professor at Portland State University and co-chair of the Virus Focus Group, “Assuming that viruses replicate the same way in all systems, detection of a virus would be an indirect detection of cellular life.” Currently, spacecraft machinery is being developed to analyze long-chain polymers such as DNA and RNA.

Frankly, it would be an understatement to say that viruses have a bad reputation among humans. With the ongoing COVID-19 pandemic, everyone knows the impact these tiny biological agents can have. They possess the potential to harm human health, drastically alter social patterns and can destroy the world.

Although some viral strains have huge impacts on human health (SARS, COVID-19) a majority of viruses mostly infect microbes. It is hoped that astrobiology will now assist in changing our mindset on viruses and help us see them in a more positive light.

Another bizarre theory suggests that COVID-19 came to Earth aboard a space rock. Although, there’s no evidence that it came from space, yet a group of panspermia proponents are wildly speculating that’s the case. If it is true, its implications could be downright dangerous. The space virus theory has been explored greatly by a pair of researchers – Edward J. Steele and N. Chandra Wickramasinghe. Since the pandemic began, they have published ten papers on the topic.

Over the years, astrobiology has been a key component in investigating the planet’s history. By conducting proper research on the conditions that resemble early Earth or other planets, scientists can investigate the environmental conditions that may have ultimately led to the development of life. Astrobiology really pushes the boundary of what sort of life or what signs of life one could expect. There’s so much yet to be discovered, all we can do is wait!