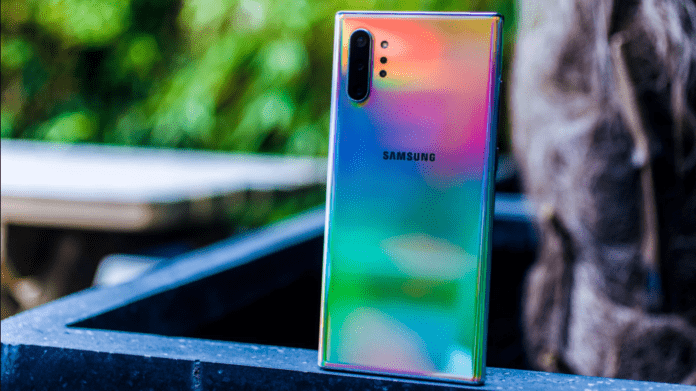 After months of anticipation and numerous rumors and leaks, Samsung has finally unveiled its latest flagship, the Galaxy Note 10. And this time, it’s not a single device, for the first time ever, we are going to get two different Note variants, the standard Note 10 and a bigger Note 10+.

The Samsung Galaxy Note 10 was surely one of the most eagerly awaited mobile launches of the year, and to be honest, it didn’t disappoint. The Galaxy Note 10+ has a 6.8-inch panel while the Note 10 has a smaller 6.3-inch screen similar to the Galaxy S10.

The Galaxy Note 10 has a Dynamic AMOLED Infinity-O display with an FHD+ (2280x1080p) resolution and a pixel density of 401ppi, meanwhile, the Note 10+ has the same dynamic AMOLED panel with a QHD+ resolution (3040x1440p) and a pixel density of 498ppi. The single selfie camera cut out has moved to the center this time, and the rumors of a dual selfie camera turned out to be false.

Both the phones are powered by Samsung’s first 7nm based chip, the Exynos 9825 for the global units and Qualcomm Snapdragon 855 for some region-specific variants.

The photography on the Note 10 will be handled by a triple camera setup. The main lens has a 12MP sensor with optical image stabilization and dual aperture (f/1.5 and f/2.4). The other two cameras include a 12MP telephoto sensor with OIS and a 123 degree 16MP ultra-wide angle sensor. Now, with the Note 10+, this triple camera setup is given a fourth VGA depth-of-field camera. The selfie camera is the same for both the devices with a 10MP f/2.2 sensor.

Both the devices feature an in-screen fingerprint scanner similar to what we’ve seen on the Galaxy S10. They also feature stereo speakers and will support only USB-C headphones. Yes, Samsung has finally said goodbye to the 3.5mm jack with the Note 10. The speakers and the headphones are professionally tuned by Samsung’s subsidiary AKG for a better audio output.

Apart from this, Samsung also unveiled the 5G models of both the devices. The 5G variants will support only a single SIM. The availability of the 5G units will be limited to certain regions where carriers have functioning 5G networks.

The Samsung Galaxy Note 10 and Note 10+ will be available starting from August 23 while the pre-orders start from tomorrow. The pricing is obviously at the higher end of the spectrum, with the Note 10 starting at a price of $949 and the Note 10+ starting from $1,099 for the base 12GB+256GB model.

OnePlus 7T Pro Leaks – Do We Really Need This T(ea)