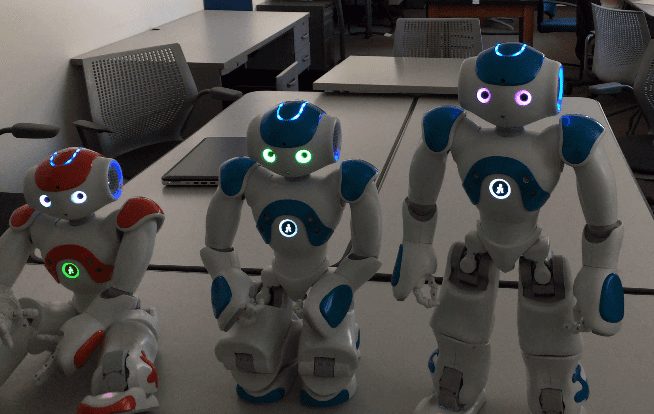 Through the past years we have seen significant evolution in robotic creations. Starting from mechanical hands to robots as advanced as Sophia who can talk and process data just like humans, we have reached an era where we need to be questioning what really separates humans from robots apart from emotions? What is really making us more efficient or smarter than them? Answer? Awareness. Human ability to change themselves, correct themselves and learn from the environment quickly is what makes humans smarter and more intelligent. Our ability to handle puzzles or diverse situations and to “think outside the box” is what separates us. We have actual minds and not a programable memory.

However, an experiment conducted a while ago showed that this line of separation might be fading a little. Professor Selmer Bringsjord performed an experiment where he presented three robots with a classic logic puzzle known as the “wise men riddle”. Bringsjord and his research squad called this riddle the “ultimate sifter” test because it could quickly separate people from machines. A machine couldn’t pass the test.

The riddle goes like: Three wise men are taken to the king and made to wear hats that they can’t see. The king tells them that the first person to say the color of his hat wins. He also tells them that the contest is fair, and that their hats are either blue or white. The solution is quite simple owing to the fact that the contest is fair and would only include hats of the same color. Therefore, to win, the wiseman would just need to note the color of his opponents’ hat.

Although this was the actual riddle, the researchers presented an altered version to the robots. The robots were programmed to believe that two of them had been given a “dumbing pill” and were no longer able to speak. Two robots were muted. They then asked the robots which of them hadn’t received the pill. To this, one of the robots spoke up to say, “I don’t know”. Upon hearing his own reply and realizing that he was the one who hadn’t been muted he changed his answer.

The robot answered, heard itself and corrected itself. Is this a proof of self-awareness? Could it be that the robot must have understood the rules, recognized its own voice and known that it is a separate entity from the other robots?  Digital Trends reported that the researchers believed this to be a display of ‘mathematically verifiable awareness of the self,’ something that has previously remained unproven.

At this stage we need to be thinking, as amazing and helpful as they are, do we need our robots to be too smart? Through thousands of years, continuous innovations have taken place and every day we move towards a better digital future. Even so, no machine created has been able to match the human mind completely. No machine has achieved the acquisition of the human brain complexities. So, is it better that we keep it that way and know when to stop? Or is it better to explore everything that science and nature possibly has to offer to become more advanced than we already are? Something to think about…