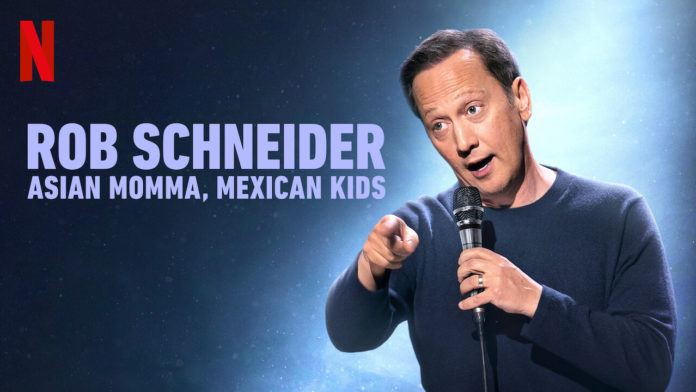 Rob Schneider: Asian Momma, Mexican Kids premiered on 11 August 2020 on Netflix. Throughout the episode, Schneider presents his thoughts and observations on relationships, kids, dating, Korean and Chinese folks and more.

Throughout this lockdown, I have watched literally every standup that has premiered on Netflix. Before watching this standup I wasn’t really aware of Rob Schneider. So, it was my first time watching any of his sets. While I came across a lot of people calling his standup special ‘boomer comedy,’ I personally, would differ from this.

Schneider walks us through his different jokes with ease and laughter and, time and again, you can hear the audience hooting that they relate. While his Chinese and Korean jokes moved a bit towards the racist side, it is hilarious how he calls the Chinese capitalists for they don’t skip an opportunity to earn. Case in point, if the restaurant is closed and you get there with 50 people, they’ll open and say, here’s our midnight special and well, I couldn’t disagree!

He talks about how his Asian mother was strict and also about his daughter’s potty training days, how in her younger days she would come to sleep with them saying she had a dinosaur nightmare and finally a funny rant about his wife. The set is filled with sex jokes but they don’t overpower his set.

One particular part I found hilarious was when he talks about how a guy would behave when he is with someone on the same level of attractiveness and when he dates someone way out of his league like a Victoria’s Secret model.

He indicates how life becomes quite sexless after marriage and responsibility weigh on people. Also, there’s a joke about sundaes and penises, so yeah.

Stream It or Skip It

STREAM IT! Rob Schneider: Asian Momma, Mexican Kids ends beautifully with Schneider and his daughter Elle King performing a duet. King’s singing and songwriting are globally famous and it is a delight to witness the duo towards the end.

Read our other reviews here.