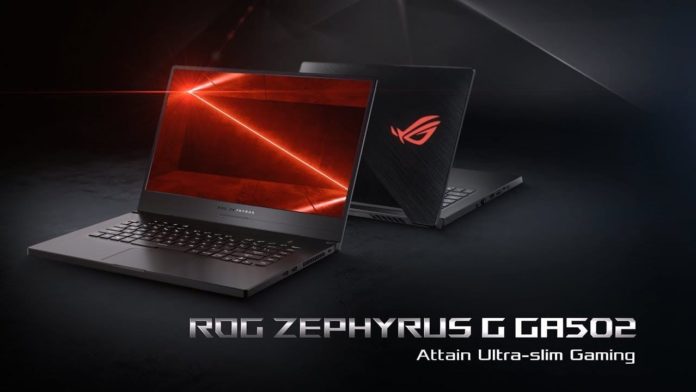 The Asus Zephyrus G GA502 is an “Ultra-Slim Gaming laptop” that brings together Ryzen processing with Nvidia graphics. I got a chance to use the GA502 for a week and I put it through a few different workloads to see how it performs. So, did it deliver on the performance it promises? Let’s find out!

There’s a lot to cover so let’s jump into it. First, let’s get the basic specs (for my model) out of the way. We’ll discuss pricing at the end:

Oh and it has an RX Vega 10 iGPU as well but who cares about that.

At just 2.04 cm thick, weighing 2.1kg, the GA502 is definitely a slim portable machine that you can carry along everywhere. The charging brick is also relatively small. The GA502 has a black aluminum lid with a brushed-metal pattern and the glowing ROG logo. The deck is plain black without any pattern on it with just a grill above the keyboard for ventilation. To be honest, I like the aggressive “gamery” design elements that some beefy gaming laptops have but I still appreciate this muted design.

The bottom panel is plastic and can be removed by unscrewing 15 screws, allowing access to components like the 76Wh battery, the NVMe PCIe SSD, Wi-Fi card and a single empty memory slot. The bottom is where you will also find the two speakers grills which we’ll discuss a bit later in the review.

Now here’s something that I found quite surprising about the build of this laptop. There were no grills or cutouts on the back panel for the two internal fans. I mean, there was a grill like design but no actual opening for the air to be sucked in or blown out. We’ll talk about that later when we discuss the performance of the GA502. And, even though the GA502 has the ‘Zephyrus’ moniker, it doesn’t have that iconic hinge design which creates an opening in the chassis when you lift up the screen, for better ventilation.

The keyboard is well laid out and has a white backlight with 3 levels of brightness adjustment. The keys feel solid and have a decent amount of travel compared to the low profile chicklet style laptop keyboards. Another thing that I appreciate about the layout is that the arrow keys are not squished together with the rest of the keys like many other laptops have. They’re full-sized and at some distance from the right CTRL key. The GA502 has independent media controls along with the ‘ROG Armoury Crate’ button but for some reason the mute button is still integrated within the F1 key, forcing you to press the ‘Function’ key first whenever you want to mute. Talking about the Function key, there’s two of them – one on the left of the Windows key and the other on the extreme right. Overall, I like the keyboard layout and after some time, got used to typing on it.

The trackpad is decently big and uses Windows 10’s precision drivers. The surface feels like glass but I’m not sure if it actually is. The left and right buttons are integrated but clicky.

The GA502 has a 15.6 inch non-glare Full HD (1920 x 1080) vIPS-level panel with a refresh rate of 120Hz. As far as I’m concerned, all displays should now have at least a 120Hz refresh rate panel and I’m glad Asus put one in the GA502. The bezels are slim, giving the GA502 a screen-to-body ratio of 81%. You must be wondering where they decided to put the webcam. Well, instead of putting it on the chin having it look up your nose, Asus decided to not put one at all so, there you have it. No need to talk about camera quality.

The screen is bright enough for indoor use and colors LOOK good, at least to my naked eye. I don’t have any device to check the actual color calibration and say if it’s the right display for video editors and content creators. But, knowing that it’s a vIPS-level panel, safe to say that the colors are at least not bad.

The best part about the screen is the 120Hz refresh rate. I can’t stress enough how much difference a high refresh rate panel makes even in your day to day usage. Even though the GA502 has just a 1080p display, the fluid high refresh gaming experience is far better what it is on a high-resolution 60Hz display.

The GA502 has a 76Wh battery which isn’t the largest, but good enough for binge sessions. Asus claims the battery will last you 7 hours if you’re web browsing or playing videos. When gaming, you’ll run out of juice pretty quick in about 1.5 hours. But why would you game without being plugged in? The battery life is decent on the GA502 which is a good thing as it adds to the casual usability of this otherwise gaming machine.

So as you know by now the GA502 has two downward firing speakers which isn’t the ideal placement but they get loud enough for watching a movie or playing games. Asus has used what they’re calling, “Smart Amp technology”, which prevents distortion at high volume. The Hi-Res Audio certification promises better detail when listening to high-quality audio formats. The bass was good enough for a laptop and the highs and mids were clear. Even though the fans get really loud on Performance and Turbo modes, maxing out the volume on the GA502 overpowers the fan noise.

You can mess around with the equalizer in the Sonic Studio app to get the right sound but I found the “Music” preset to be the sweet spot. Out of the box, the volume might seem underwhelming but once you switch it to Music, it gets decently loud.

This is what it all boils down to. How does the GA502 perform? Let’s first talk about the three main performance presets that are available. These modes can be quickly switched by pressing Function and the F5 key. The first one is “Silent” mode which as you guessed it, keeps the fans really quiet. The second is “Performance” mode which ramps up the fans according to the temps. The third is “Turbo” mode where the fans start spinning at 100%.

During my usage, I found that the GA502 got quite warm even when browsing the web or watching videos or simply using MS Word. This was when I was using the laptop in “Silent” mode. The right side of the keyboard got warm while the top of the keyboard, where that grill is located, got quite hot during regular use which made me suspicious of “ROG’s Intelligent Cooling philosophy” and the dual-fans with 83 blades each.

Switching over to a heavier workload like gaming, the grill area got even hotter. And, the fans got really loud running at 100% speed. I put the GA502 in its “Performance” mode and during games, the temps went up to 85+ degrees which can be expected from such a slim chassis. But as long as it doesn’t throttle, it’s fine. I also ran a few benchmarks like Cinebench R20, Unigine Heaven, GTA V, Shadow of the Tomb Raider and Final Fantasy XV and saw temps reach 94 – 96 degree C. While pushing the GPU and CPU hard, these kinds of temperatures can be expected but they’re still higher than I’d like to see. After all, it’s the latest Ryzen chip and its 2019! The GPU however, stayed relatively cool and peaked to about 75 degrees during one of the Heaven runs.

Games like Apex Legends and DOOM ran smoothly at max settings with well over 60 – 65 FPS average. Heavier titles like GTA V, Shadow of the Tomb Raider and Final Fantasy XV struggled to maintain 60 FPS even at medium settings. To make full use of that 120 Hz display, you’ll have to drop settings in all major titles. Check out the benchmarks below:

Remember I spoke briefly about the fan placements and ventilation earlier in the review. After seeing such high temps I tried to figure out the intake and exhaust system of the GA502. I found that the two fans did not have any opening from where they could suck in cool air. Weird right? Here’s a pic of the bottom panel where the fans are located.

Then I thought maybe the grill on the right side is where it takes in air from. NOPE. That’s an exhaust. What about the grills on the back? NOPE. Both exhausts. So where is this machine taking in air from? I can only suspect that the grill above the keyboard is where the air comes in. Which, if true, is just bad design. I tried the very scientific and popular “flying tissue method” and put small pieces of tissue in front of each grill. They flew away when placed in front of the two grills on the back and the one on the right side. Which just leaves the top grill.

Check out this pic of the internals from Tom’s Hardware. See the fan on the left? It’s connected to the rear exhaust (left) and doesn’t seem to have an intake. The fan on the right has two outlets, both of which are exhausting air. I have no idea why it’s like this and where the GA502 intakes air from. But, as long as it doesn’t throttle right? Which it didn’t.

We’ll have to wait for the TUF FX505 laptops to come in for review so we can figure out if the 3750H normally runs hot or if the cooling system on the GA502 is just weak.

The temps and fan noise is where I was a little disappointed by the GA502. The fans get really loud and the laptop gets hot even during casual usage. Even though there is decent elevation on the bottom with the rubber feet, you simply cannot use the GA502 on your lap even for short durations. As of now, the GA502 doesn’t seem to be worth the 1 lakh price tag. However, with the sale going on, Flipkart has it listed for Rs.79,990, which makes it sort of a considerable option.