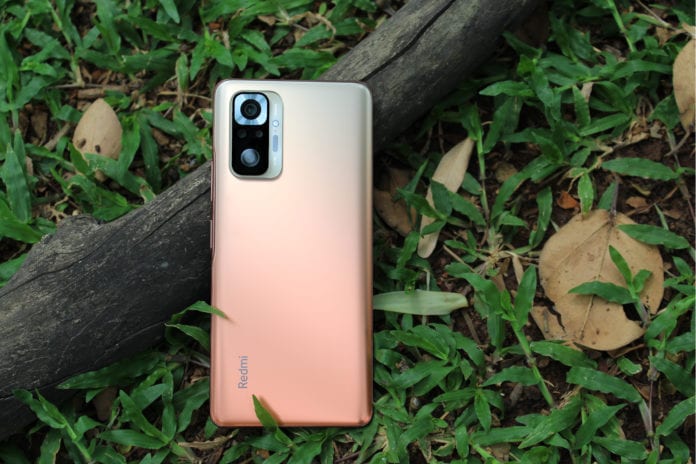 The Redmi Note 10 series has gone a considerable design overhaul. Xiaomi is calling this new design ‘Evol.’ So, what’s new with Evol? Well, it’s now more premium and looks less tacky with a minimalistic ‘Redmi’ branding at the back instead of giant logos or brand slogans.

Despite having a massive 5020mAh battery, the Note 10 Pro Max is considerably slim and lighter than its counterparts. Comparing it with its predecessor, it’s 17 gram lighter than the Note 9 Pro Max, and it’s just 8.1mm thick instead of 8.8mm.

Note 10 Pro Max’s highlight feature is its 108MP camera, and Xiaomi has left no stones unturned to get our attention to it. The camera module is a bit protruding, but it looks damn beautiful and premium. At first look, you’ll mistake it for some flagship smartphone.

I don’t know whether this concerns you or not, but the side rails now feel premium despite being made of plastic, and that cavity feels pleasing, and it adds a premium touch that is quite hard to find in this price segment.

You can find the volume rocker and fingerprint sensor embedded inside the power button on the right side while the sim card tray is on the phone’s left side. The bottom houses a USB Type C port, a speaker grille, and a microphone, whereas the top accommodates a 3.5mm headphone jack joined by a speaker grill, a secondary microphone and an IR blaster.

The gradient backs overtook the market in the last couple of years, and almost every smartphone manufacturer jumped on it. Personally, I have never been a fan of those flashy back panels, and I thank Xiaomi for jumping out of that wagon.

The front and back are protected by the Gorilla Glass 5. So, there’s not much to worry about, but I’d suggest you put a case on before since the back can be a little slippery at times.

After nine iterations, Xiaomi finally switched over to the AMOLED display. The Note 10 Pro boasts a 6.67-inch FHD+ Super AMOLED panel having a 120Hz of refresh rate. Frankly speaking, I didn’t have many expectations with the display, considering this is a sub-20K smartphone, but this AMOLED panel is hella good; the blacks are pitch-perfect, and the colours are accurate. The display gets bright enough even when you’re using it outside on a bright sunny day.

The front is nearly bezel-less, and the selfie camera cutout is relatively tiny. However, it has a silver crown around it, which might sometimes be distracting.

For context, I have been using a 60Hz display for the last five years, and now it’s tough for me even to go back to my Pixel 2a. The 120Hz panel on Note 10 Pro Max feels super smooth, but at times it’s been held back by the resource-hungry MIUI. It would have been great if Xiaomi gave us an option for a dynamic refresh rate instead of being stuck with either 60Hz or 120Hz.

In the end, there’s not much to complain about the display. It’s a great display that sets the criterion for its competitors.

Performance – MIUI SUCKS THE FUN OUT OF THE ROOM

There are high chances that you already know about the internals of this smartphone. Still, for those living under a rock, the Redmi Note 10 Pro Max is powered by the Snapdragon 732G coupled with Adreno 618 GPU. It’s a top tier chipset, and it does perform like one, but the true potential of the chipset is being held by MIUI.

We’ll get to the MIUI in a bit but let’s talk about the gaming performance first. I’m not a hardcore mobile gamer, but I tried playing few titles on it, including Call of Duty, Clash of Clans and Asphalt 9. The performance was quite good, and I was able to play these games at max settings without any hiccups getting an average frame rate of 50fps. Moreover, light-hearted games such as Subway Surfers, Among Us and Alto’s Adventure were a breeze. So, if you’re getting this one for gaming, then it won’t disappoint you.

It’s time for the MIUI. So, MIUI is good, it’s full of handy feature, but you do get bloatware and advertisements free with it. Though the situation is a little under control now, you can turn off the ads while setting up the phone. You can also turn them off later by opting out of the personalised ad recommendations.

But MIUI has a bigger problem – RAM Management. So, MIUI never had an excellent track record in RAM management. It is much better than its previous versions but still is a headache. Personally, I would suggest getting the 8GB RAM variant if you’re considering buying the Note 10 Pro Max.

Another issue that bugged me a lot was the notification shade; the messaging and WhatsApp notifications are not displayed properly; sometimes, the conversation notifications overlap. Then there’s Dark Mode, which is relatively better than the previous iterations of MIUI. But now, it forces every app to run in dark mode even if it doesn’t support it, which sometimes makes things unbearable.

These issues are kind of spoils the party, but I expect future updates to fix these issues. Xiaomi says that the MIUI 12.5 update is in the pipeline for the Redmi Note 10 series, and possibly this could be the end to my miseries.

Redmi Note 10 Pro Max comes with a beefy 5,020mAh battery which is nothing new for the Note series, but now there’s a 33W fast charger to juice it up. During my time with it, the phone was able to get me through a day, and that 33W charger was more than able to charge it from 0-100% in an hour and a half. I was pretty shocked to get these stats considering it runs on MIUI. Nevertheless, the battery life is excellent, and there is no need to worry about it.

The stereo speakers on Note 10 Pro Max are damn good. They are loud and crisp clear. You won’t feel anything missing both while gaming or while consuming media. Further, the haptics on the Note 10 Pro Max needs a mention. The haptic motor on this smartphone is undoubtedly the best in this price segment.

So you must be knowing by now that the Note 10 Pro Max comes with a 108MP camera, and sure the number is enormous, but the question is, how does it perform in real life?

The 108MP Samsung HM2 sensor can produce images with adequate details and natural colours. The dynamic range is also good enough, and HDR mode comes in handy during tricky situations. By default, the camera clicks 12MP images, but there’s also an option to click pictures in 108MP mode to get more details though the pictures are not that impressive.

You can also click images at 2X, and you can zoom up to 10X, but anything farther than 2X may not turn out to be good. But yeah, it’s good even during artificial or low light conditions.

Overall, the 108MP camera is not truly a gimmick. It is better than most of its competitors, but it shouldn’t be a deciding point during your purchase.

Then there’s a 5MP SuperMacro camera. In my opinion, this is the best macro camera I have seen in any budget or mid-range smartphone. The images clicked with the macro camera were missing out on the details, and the colours were a bit off. But, the end result turned out to be pleasing. It’s obviously better than those 2MP macro cameras that we see in most smartphones these days. Most importantly, it gets the job done, and that is more than enough.

Like several other smartphones, the Note 10 Pro Max also packs a 2MP depth sensor, and its only job is to help out with portrait shots. Well, it gets it done; the portrait shots have a nice depth of field, and edge detection is also okay if not perfect.

Speaking of the cameras’ low light performance, the primary camera clicks decent enough pictures, but there’s a bit of noise. The images from the ultra-wide camera turned out to be a tad darker than the primary camera, but the shots can be nice if adequate light is provided.

According to Xiaomi, the Redmi Note 10 Pro Max comes with an improved Night Mode 2.0. When turned on, the images come out to be brighter and less noisy, but it loses out on details. Also, the Night Mode is not available for the ultra-wide camera.

There are quite a few exciting features in the Note 10 Pro Max’s camera app, such as the VLOG, Dual Video and Clone mode. It also has Pro Mode for the Pro users out there who likes to play around with the camera.

Finally, there’s a 16MP camera at the front, and selfie freaks won’t be disappointed for sure. The front camera clicks detailed shots without over-saturating the skin tones. You can also click portrait selfies, and the end results were pleasing.

For Rs 18,999, Redmi Note 10 Pro Max is an absolute all-rounder. It leaves behind the competition in terms of design, and that 120Hz SuperAMOLED is just beautiful. The performance is on the mark though the software experience isn’t the best out there. We expect Xiaomi to iron out these issues with the MIUI 12.5 update. The cameras might not be the best, but they are good, and that 5MP macro camera is the hero of the show. Overall, it’s all good, but there are few caveats.

On the other hand, Xiaomi also has Mi 10i, which is available for Rs. 2,000 more, and it comes with a tad powerful Snapdragon 750G processor, with support for 5G. This again makes things tricky for consumers, but this time it’s easier to recommend the Redmi Note 10 Pro Max since 5G isn’t going to be a deciding factor in India for the next year or two. People usually upgrade their device in a year or maximum in two years, so it doesn’t make any sense to worry about your phone not supporting 5G now when it’s not coming anytime soon.