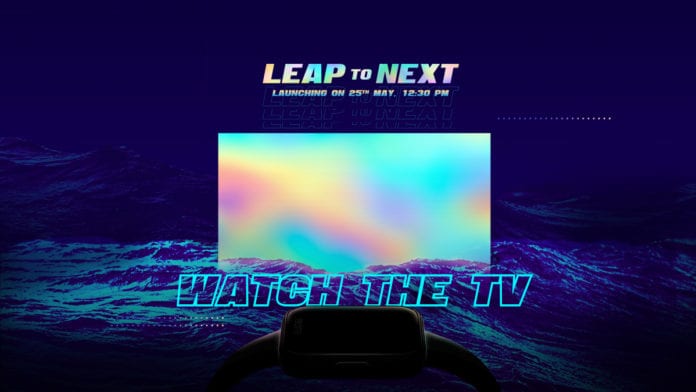 Realme India is all set to unveil its much-anticipated products, Realme TV and Realme Watch, on May 25 through an online event. The news was announced today by Realme’s CEO Madhav Seth on Twitter. With the upcoming devices, Realme is expanding its range of smart IoT (Internet of Things) products in India.

As per the media invite, the online event will take place at 12:30 pm on Monday, May 25. A pre-recorded event will be streamed live on the company’s social media platforms including YouTube, Twitter and Facebook.

Thanks to numerous leaks and rumours, we have some details regarding the Realme TV. It was recently spotted in a leaked image showing the TV wrapped in its packaging and stored in a warehouse, with a screen size of 108cm (43 inches) printed on it. Moreover, two Realme TV models – 32inch and 43inch were certified on the Bluetooth SIG website last month. Additionally, it was reportedly spotted on the Android TV certification site, revealing that the upcoming TV will run on Google’s Android TV platform. The Realme TV lineup will directly head-on with Xiaomi’s popular Mi TV series.

The imminent launch of the Realme Watch was teased by the company yesterday on its Twitter account via a teaser video. The watch is expected to have a 1.4-inch TFT display with 320×320 pixels resolution. It is also rumoured to have an IP68 rating for water resistance and run on a proprietary OS. The Realme Watch is said to have a 160mAh battery and offer 24hr continuous heart-monitoring.