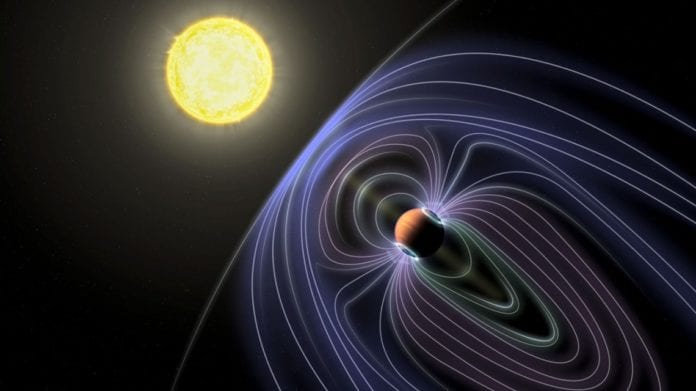 For the first time, scientists may have detected radio emissions from an alien world, from a planet orbiting a star beyond our Sun.

The team was led by Cornell postdoctoral researcher Jake D. Turner, Philippe Zarka of the Observatoire de Paris – Paris Sciences et Lettres University and Jean-Mathias Griessmeier of the Université d’Orléans. Their research was published by Astronomy and Astrophysics.

The researchers used a radio telescope in the Netherlands to examine three different stars known to host exoplanets. Exoplanets are planets beyond the solar system. Thousands of exoplanets have been discovered in the past two decades. These observations were compared to observations of Jupiter, diluted as if being seen from a star system dozens of light-years away.

Tau Boötes, a star system with at least one exoplanet, stood out. If the detection holds up, researchers could gain a better understanding of the magnetic fields of exoplanets, and hence the exoplanets themselves.

Jake Turner, an astronomer at Cornell University and lead author of the new research, said in a statement, “We present one of the first hints of detecting an exoplanet in the radio realm. We make the case for an emission by the planet itself. From the strength and polarization of the radio signal and the planet’s magnetic field, it is compatible with theoretical predictions.”

However, Turner and his team aren’t sure yet that the emissions were coming from the planet. The researchers will further observe the system 51 lights years away.

The new research began with Jupiter. The researchers had studied Jupiter’s radio emissions previously. They tweaked these observations to reflect the expected effect of – closeness to the host star and distance of Earth – on their observations of an exoplanet.

The findings of the research

Researchers believe the information of radio emissions from planets can help them understand what’s happening in their magnetic fields. These magnetic fields influence conditions on the planet’s surface. Earth’s magnetic field protects the atmosphere, which makes it habitable for us. It also tells scientists other facts, like its structure or history.

Despite the fact that nearly every planet in our solar system has had a magnetic field at some point in history, studying these has been difficult. Hence, radio emissions are used as an intermediate.

Turner said, “We learned from our own Jupiter what this kind of detection looks like. We went searching for it and we found it.” Turner emphasized that this is just the beginning since the radio emissions could be coming from another source and not the planet. “There remains some uncertainty that the detected radio signal is from the planet. The need for follow-up observations is critical.”

Ray Jayawardhana is also a co-author of the study. He is Turner’s postdoctoral advisor and the Harold Tanner Dean of the College of Arts and Sciences, and a professor of astronomy. He said, “If confirmed through follow-up observations, this radio detection opens up a new window on exoplanets, giving us a novel way to examine alien worlds that are tens of light-years away.”