Search
Home News Gaming PS Plus February Lineup Is One of The Best Ever – Get...
Facebook
Twitter
WhatsApp 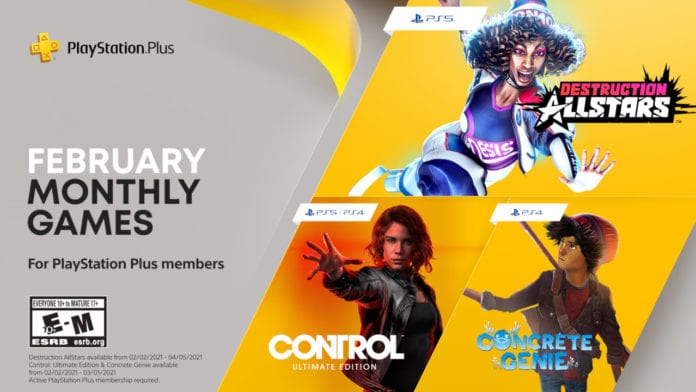 The PS Plus free games lineup for February has been revealed, and it’s one of the best ever. Next month, PS Plus members will be able to get their hands on Control: Ultimate Edition (PS4, PS5), Concrete Genie (PS4) as well as Destruction AllStars (PS5) for free.

This marks one of the biggest PS Plus free games lineups in recent months, with all 3 games providing tremendous value.

Control: Ultimate Edition may have gotten a lot of backlash for it not following the ‘Free PS5 upgrade’ path that other games have, but it’s still a great game. Remedy Entertainment’s gorgeous shooter is a perfect candidate for a next-gen upgrade, as we noted during our time with the game on PC in all its ray-traced glory. Giving away both the PS4 and PS5 versions of the game is a good move on Sony’s part.

Concrete Genie is a smaller game that deserves more attention as it showcased developer Pixelopus’ unique visual approach with interesting gameplay mechanics. It’s a nice little addition alongside the 2 other juggernauts on the list.

Lastly, Destruction AllStars is a PS5 exclusive game which was first revealed at Sony’s June showcase as a full-price game. It seems Sony made the right decision to make it a free PS Plus title as it clearly wants a budding community around the game. It’s kind of what propelled Rocket League to its success, and we hope Destruction AllStars follows suit, provided it’s good. We also now have a new look at its gameplay which you can check out above.