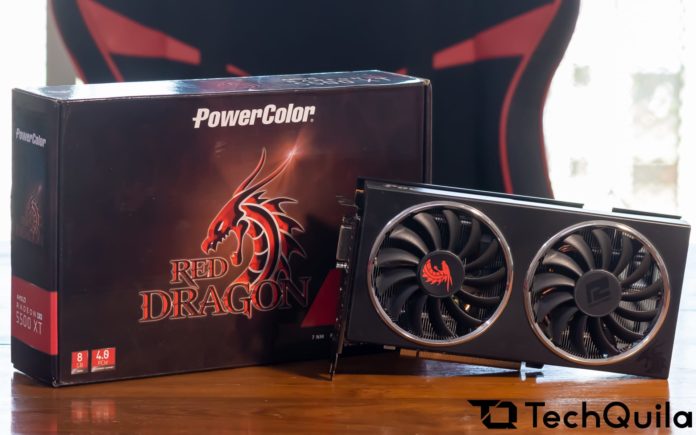 When AMD revealed the two newest members of their family of the first-gen RDNA powered cards, we were excited. After all, when you have at least one GPU in each price segment, it becomes easier for consumers. Today we’re taking a look into the Radeon RX 5500 XT, or rather the Powercolor Red Dragon variant of it.

Before jumping in, I’d like to set expectations for this card. While its bigger brother, the RX 5600 XT is targeted towards luxury 1080p gaming, this one’s not. You can check out our review of the same here. The 5500 XT is really meant to tackle the NVIDIA GTX 1650 Super. So, with that in mind, let’s jump into it.

Starting off with the specs, the RX 5500 XT has 22 compute units at a boost clock of up to 1845 Mhz. Aside from that, AMD also markets this card with a ‘game frequency’ of 1717 MHz, which is the typical frequency that it’ll run at while playing most games. The card comes in with a TDP of 130W, using a single 6+2 pin power connector.

Let’s move over to the ports used here. The 5500 XT has one HDMI 2.0, one Display and one DVI port each. It might seem a little lacking, but then again it’s targeted towards more casual gamers.

We recently reviewed the Sapphire Pulse RX 5500 XT, which comes with 4 GB VRAM. This card, on the other hand, has double the memory with 8 GB of GDDR6 memory. It’s a confusing offer considering who this card is targeted towards – budget 1080p gamers. At that resolution, you won’t be going over 4 GB of memory any time soon. If, however, we do start seeing games utilize more VRAM over the next few years, then it’s a smarter choice to turn down certain in-game settings to save memory and performance. AMD explained the discrepancy between the choice of VRAM here. More on that in a moment.

We used the following system for benchmarking the card:

Seeing as how this card is targeted towards budget gamers, we only tested games at 1080p resolution, using a bunch of older as well as newer games using DirectX 12. Another thing to note is that we used the default settings for the card, without touching any additional overclocking setting or anything else. This is what the most standard experience is going to be for the majority of gamers.

As you can see from the chart, the card doesn’t exactly manage to scrape above 60 fps in most games. It usually comes down to which is the better-optimized game, as is the case with Gears 5. However, it should be noted that these games were set to their highest settings possible (without RTX obviously). For budget gamers who don’t care much about the highest visual quality, this card might just do well.

Another weird thing to note is that in Witcher 3 we were able to turn on hair works as well as HBAO+ features, even though those are NVIDIA specific features. As with NVIDIA cards, we saw a hefty performance hit with those features turned on, even though we didn’t see any visual changes. Suffice to say that these Gameworks features are not optimized well for team red’s cards. Once we removed them, we saw a nice increase with the game running at 73 fps.

Let’s move on to some other benchmarks then?

Those were pretty much expected. So that leaves us with one question – Should you get this card, especially with heavy competition at this price range? Well, so far it isn’t really providing anything extra. Maybe overclocking will provide some benefits?

Using AMD’s Radeon Software, we can overclock the card without much hassle. Using the default ‘Overclock GPU’ option, we get a new boost clock of 1860 Mhz. It’s not much and translates to roughly 6% gain during gaming.

Overall, AMD’s latest Navi offering is a little hard to recommend. It doesn’t exactly provide anything extra over the competition, and overclocking doesn’t help much either. Radeon Software though does have some nice features which can be appreciated, but the card itself remains a little underwhelming.

If you can squeeze a little more out of your budget, you might want to get the RX 5600 XT for its better performance in everything. Otherwise, the RX 5500 XT will do just fine for its price segment. We’ll have more comparisons coming up soon between AMD’s own family of Radeon cards as well as with NVIDIA’s offerings.