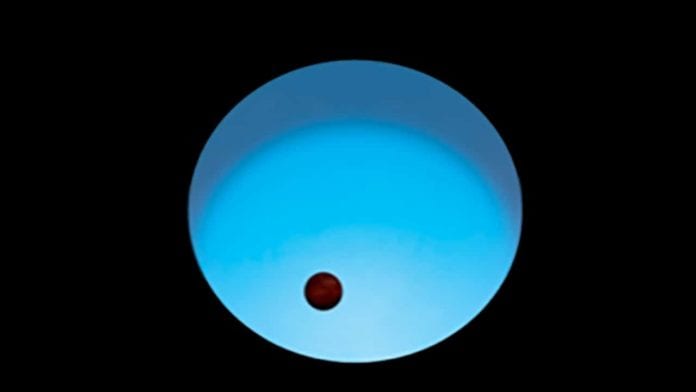 A planet is nothing more than a lump of mass held together by its gravity. While stars are approximately the same thing, their gravitational pull is so strong that it starts a nuclear reaction at the core. There is a very fine line between a both of them. After all, if a planet gets big enough, it can undergo ignition. This does not mean that they are not important. For obvious reasons, they are the most appropriate place for life to exist. This is one of the reasons why researchers have been scanning the skies for exoplanets.

In their attempt to find new exoplanets, researchers seem to have stumbled across a particularly extreme exoplanet that has some mind-blowing stats. This gas giant has a scathing surface temperature of 3,200 degrees Celsius. The European Space Agency measured the temperature with the help of their Characterising ExOPlanet Satellite (CHEOPS). The measured temperature is so high that no metal or rock can survive in its solid form on this particular celestial body. It is called as WASP-189b, and it has some of the highest surface temperatures ever measured on a gas giant. It is as hot as a small dwarf star.

While these temperatures are nothing compared to most of the main sequence stars, they are very extreme for a planet. The planet is about 1.6 times the size of Jupiter and orbits its star once every 2.7 days. It is tidally locked with its star, which means that one side of the planet is permanently facing towards the star while the other side is permanently facing away. WASP-189b is an anomaly in more than one way. It is a gas giant that orbits its star extremely closely; this is a relatively rare finding in our Universe. It is about 20 times closer to its star than Earth is to the Sun.

Another interesting discovery about WASP-189b is that it is spinning so fast that it is being pulled apart at its equator. The exoplanet with all its anomalous behavior is too close to its star for CHEOPS to observe directly; therefore, the only way to observe it is to study the effects it has on the light of its star. Therefore the satellite studied the light from the star HD 133112 once while the gas giant passed from behind it or occultation and once it passed in front of it or transit.

The researchers were able to figure out all the characteristics of the gas giant, which led to the release of this extremely intriguing announcement. WASP-189b raises more questions than it answers, now the researchers have new mysteries on their hands that they need to resolve. Further investigation and analysis of the data from CHEOPS will lead to a better understanding of this gas giant and maybe help us figure out some of the unresolved mysteries of the Universe.