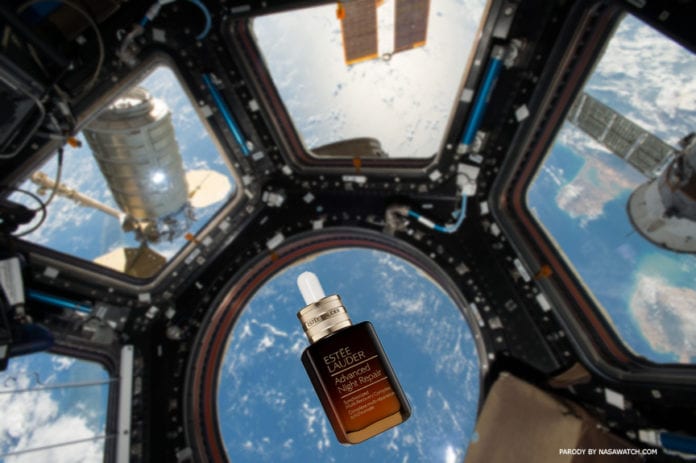 Taking advertising to a whole new level, US cosmetics company Estée Lauder is sending its new skincare product into space aboard a NASA spacecraft for a photoshoot! Yes, you read that right! Surprisingly, it’ll cost only about as much as paying a big influencer for a few Instagram posts.

The U.S. cosmetics giant is spending $128,000 (or Rs 95 lakhs) for NASA to fly 10 bottles of its skin serum to the International Space Station. Additionally, the company is planning to auction one bottle off for charity when the items return to Earth this spring.

The brand announced that they will launch their night repair serum into space, which will be photographed in the space station’s iconic cupola window, which has panoramic views of the cosmos. The serum will begin its journey to ISS alongside 8,000 pounds of other commodities in the Northrop Grumman Antares rocket.

The highlight is that Estée Lauder will be the “first beauty brand ever to go into space” as a means to tout its “skincare innovation.” Once in the microgravity environment of the ISS, astronauts will take pictures of Estée Lauder’s Advanced Night Repair which will be later put to use for the brand’s social media platforms, ad campaigns, or other promotional activities. The product took off on September 29th 2020 and will arrive at the International Space Station on October 3rd, 2020. Estée Lauder will also be paying a fraction of what the overall project is expected to cost for the whole mission.

Why did Estée Lauder pick the ‘New Advanced Night Repair’?

As for the choice of product, the company chose the new Advanced Night Repair Synchronised Multi-Recovery Complex for the journey to space because the iconic product has shaped the future of skincare with a legendary legacy. “We chose this iconic product because of its long history of firsts in the beauty industry.”

“When it launched in 1982 as Night Repair, it was the first nighttime repair serum in the beauty industry and the first-ever beauty product to use hyaluronic acid. Now, 30 years later, we are adding another first to its legacies as the first serum to launch into space,” Stéphane de La Faverie, group president of Estée Lauder Companies and global brand president of Estée Lauder said.

The global recession triggered by the coronavirus pandemic has pushed brands to get more creative with their advertising because consumers are cutting back. Several companies are investing less in traditional ads and are looking for new ways to break through the glut of content out there.

In a bid to stand out in a crowded field, Estée Lauder, the beauty giant has taken this step into the International Space Station as a marketing prop. In June 2019, NASA had announced that it was opening the ISS to explore new opportunities including commercial activities and space tourism. Certainly, NASA is hoping to expand its use, including private citizens visiting the space station.

Estée Lauder’s push into micro-gravity is part of NASA’s effort to commercialize low-earth orbit and make it a domain where private enterprise eventually does business as routinely as the government conducts spacewalks. Companies from Goodyear Tire & Rubber to Merck & Co have used space for research earlier. “We need to expand people’s perspective on what we can accomplish in space,” said Phil McAlister, NASA’s director of commercial spaceflight development.