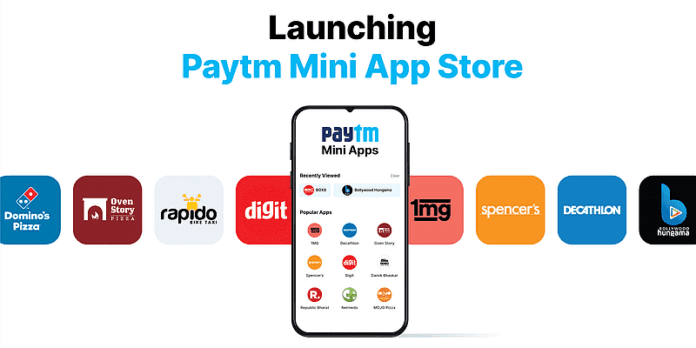 Paytm is arguably the most widely used e-wallet service in India and expanding on that success is the natural next step. Paytm has now dove into the app store sector with a bunk of mini-apps that are quick and easy to use. Is it enough to take chunk of pie from Google’s Play Store market monopoly? Let’s find out.

Mini-apps are rather mobile-specific web apps that provide a seamless and intuitive experience like an actual application without having to download the actual app completely onto your smartphone. These apps are often made using simple HTML and Javascript techniques.

Mini-apps or web-apps are lighter versions of actual apps that are web-based and often are OS independent (i.e. designed to use across Android, iOS, etc alike). This is similar to the Play Store’s Instant Apps, and Apple’s new iOS App Clips.

Why is Paytm willing to get into it?

Paytm’s decision to get into the App Store market can be stemmed back to disputes it has been running into with Google.

Earlier in September, the Company had run into troubles with Google, after promoting sport-based cashback offers that violated Google’s anti-gambling policies. As a result, the app was temporarily taken down from the Play Store.

Later, we learned that top executives from India’s tech giants were interested in launching India’s own App Store.

The company’s founder and Chief Executive Officer, Vijay Shekhar Sharma, has been a key speaker in Google’s unfair business tactics.

It comes as no surprise hence, that Paytm is willing to facilitate an app store taking advantage of its widespread reach.

What comes up next?

The Noida-based company is now arranging a developer’s conference which will provide a detailed insight as to how the fintech company plans to execute this entire operation.

Paytm has already pulled in reputable apps like McDonald’s, 1Mg, Fasoos amongst others. It is boasting its more than 150 million active users and its plans to promote small businesses and startups.

Paytm has also confirmed that it will let app-developers distribute their apps on Paytm’s Mini-App Store for 0% payment charges for Paytm and UPI transactions. Though it will charge a 2% cut for other modes of payment like credit cards.

What remains to be seen how the odds stack up and how Paytm’s daring act fares in real world.