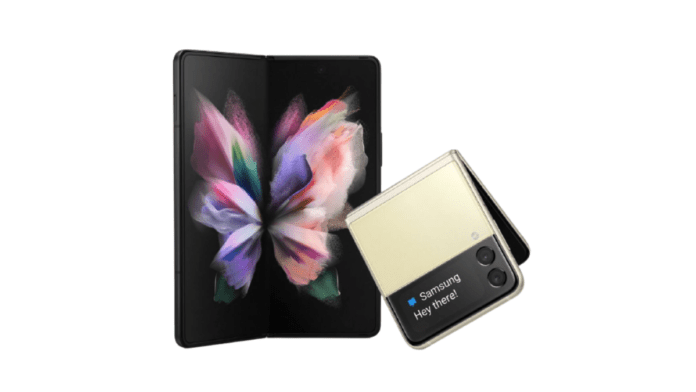 Over the past few months, there has been quite a buzz around the launch of Samsung’s next foldable smartphones, the Galaxy Z Flip 3 and the Galaxy Z Fold 3. Though the phones are speculated to debut next month, the purported renders of the two devices have already hit the Internet. Along with the design, their various colour options and few key specs have been leaked too. If this wasn’t enough, the Indian launch timeline of the devices has also been rumoured online. Here’s our first look at Samsung’s Galaxy Z Fold 3 and Galaxy Z Flip 3.

Courtesy of the well-known tipster Evan Blass, we have 360-degree videos of the Samsung Galaxy Z Flip 3 in all four colourways – Gold, Black, Olive Green and Purple. The videos particularly suggest that Samsung will retain the same clamshell form factor that we saw last year on the Galaxy Z Flip.

The videos also showcase the dual-tone rear side of the phone, housing a larger cover display of 1.9-inch over the 0.98-inch available on the last-gen. Another noticeable change is the alignment of the dual-rear cameras, which are now vertically aligned.

The inner display will still maintain the screen size of 6.7-inch with a 25:9 aspect ratio. The device seems to have a centrally aligned punch-hole selfie camera. Furthermore, the leaked video suggests a side-mounted fingerprint reader.

Now moving on to the Galaxy Z Fold 3, some purported renders of its design and colour options have surfaced online. According to 91mobiles, the device will be available in three colour options – Navy Green, Black and Gradient (with a pinkish hue). All three options appear to have a matte finish rear panel. The phone seems to sport a triple rear camera array and a hole-punch selfie camera. Furthermore, the rear camera setup seems to have a more contracted camera bump as compared to the Galaxy Z Fold 2.

As for the specs are rumoured to have three 12MP rear camera sensors along with a 16MP selfie camera shooter. On the other hand, the cover display will have a 10MP sensor. It is expected to sport a 7.5-inch foldable display and a 6.2-inch cover display. Under the hood, it is said to have the flagship Qualcomm Snapdragon 888 SoC, along with up to 512 GB of internal storage. The upcoming foldable will feature S Pen support as well.

If the report from 91mobiles is to be believed, both Samsung Galaxy Z Fold 3 and Galaxy Z Flip 3 will debut globally in the second week of August at a Galaxy Unpacked event. However, the Galaxy Z Fold 3 will release in the country in September.