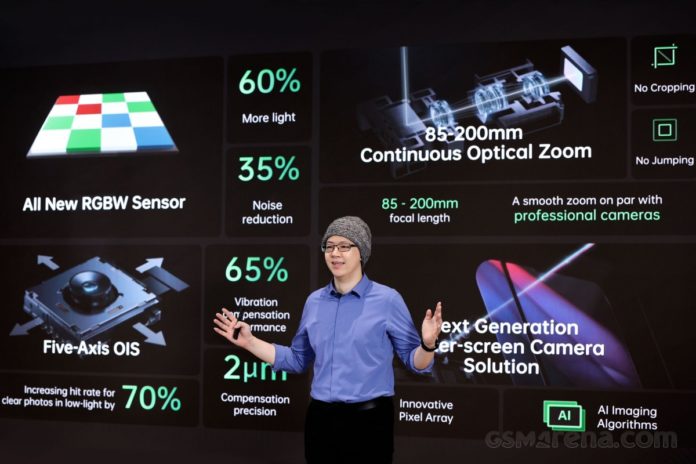 Few days after announcing its new camera innovation lab in Hyderabad, Oppo has showcased some of its new camera technologies, debuting in smartphones launching later this year. The event was headed by the company’s Director of Imaging Simon Liu.

The company unveiled a new sensor, a variable zoom lens, new sensor stabilization technology and an improved algorithm to control the next-gen under-display cameras. So let’s have a look at what’s cooking up at Oppo’s imaging division.

The second sensor in the list is an 85-200mm continuous optical zoom sensor. The new zoom sensor brings quite a few innovations onboard, including the glass + plastic approach, a new tunnel magnetoresistance sensor (TMR), and a new shaft motor supporting “Continuous Optical Zoom at higher magnifications.”

The sensor is not expected to debut soon as there could be some issues considering it would have quite a few moving parts. Oppo says they will continue conducting various drop and reliability tests before the sensor hits mass production.

Aside from announcing a bunch of new sensors, Liu also talked about Oppo’s newly developed algorithm for the under-display camera. The new algorithm is designed to work with a pixel density of 400ppi over the camera. Oppo says that this solution would provide for much better control over chromaticity and brightness.