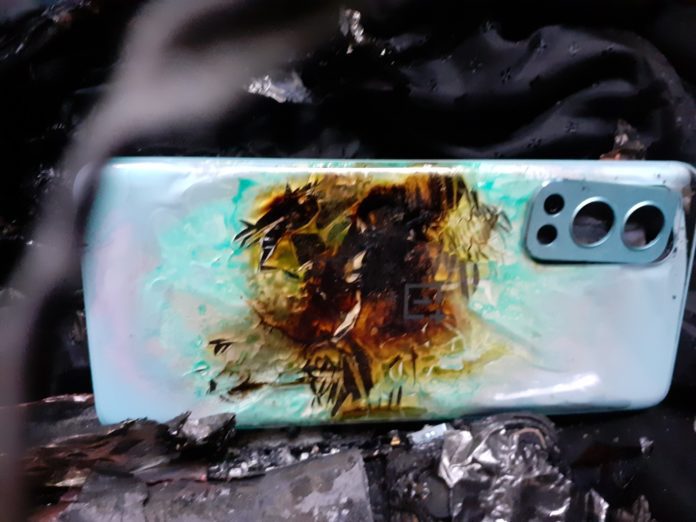 OnePlus Nord 2 is back in the news, but not in a good way. A Twitter user named Gaurav Gulati, who happens to be a Delhi-based advocate, alleges that his OnePlus Nord 2 caught fire and exploded afterwards. The catch is that the device was not plugged in for charging but was resting idle. Well, this is not the first time Nord 2 has been allegedly reported for exploding. The first instance of its blast was reported online just last month, and in clarification, the company said the incident was caused due to external factors. Meanwhile, another similar incident was reported, but it turned out to be fake.

In the images shared by Advocate Gaurav Gulati, it can be seen that the handset is completely damaged from both the front and back. According to the report from MySmartPrice, the Nord 2 was in Gulati’s black lawyer’s robe when he felt something warm in his pocket, and the moment he saw smoke coming out of the device, he tossed his robe away. The handset later caught fire and exploded inside his chamber in New Delhi. The advocate said that the phone was not connected to the charger and had 90 per cent of charge left when the incident occurred.

Later OnePlus reached out to Gulati and asked him to submit the device for investigation. However, Gulati refused to give the phone and has said that he would file a legal complaint against OnePlus India and submit the device to the police for further investigation. Additionally, he has said that he will also complain to the consumer court and urge the authorities to halt the sales of the OnePlus Nord 2 in India. The victim reportedly suffered injuries around the stomach area, and according to him, OnePlus has been insensitive to his injuries and trauma he suffered.

The publication reached out to OnePlus India and here’s what they said, “Last evening, an individual notified us about an alleged blast case for the OnePlus Nord 2 on Twitter, and our team immediately reached out to this individual to verify the legitimacy of the claim. We take every claim such as this very seriously out of concern for user safety. However, despite multiple attempts to analyse the device, including a visit to the premises earlier today to examine it in the individual’s presence, he has so far denied us the opportunity to perform a proper diagnosis. Under such circumstances, it is impossible for us to verify the legitimacy of this claim or address this individual’s demands for compensation.”