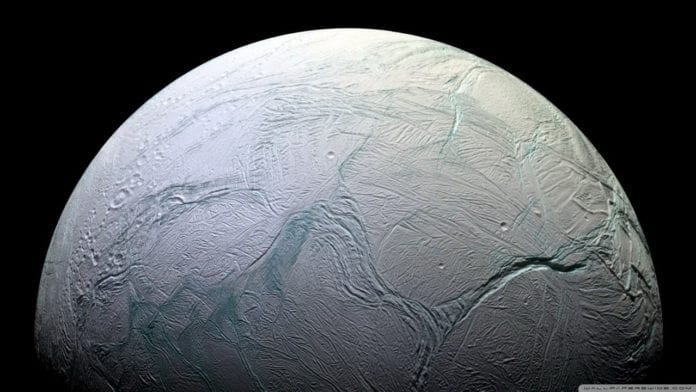 Enceladus could have ocean currents beneath its icy surface, much like the oceans back home. A new analysis by researchers suggests that there are indications on the ice covering the moon’s global oceans that currents are flowing there. This also indicates that Enceladus’s oceans might not be homogenous as previously thought. This could be a big discovery if proved to be true as history has shown that getting reliable information about the oceans beneath this Saturnian moon’s surface is extremely difficult.

The icy moon has been probed by multiple visitors, starting from the Voyager 2 in 1981, when the satellite passed close to Enceladus on its way out of the Solar System. The photo revealed it to be a shiny ball of ice just 500 kilometers across. The surface of this relatively smaller moon is surprisingly full of cracks and mountain ranges which seems to suggest geological activity. It would take about 30 years after that for the next big discovery about Enceladus to happen. That is when the Cassini probe found geysers of liquid water spraying from fractures in the icy shell. That’s when the researchers realized it wasn’t ice all the way down, there was a salty liquid ocean below.

The heat required to keep that water in the liquid state comes from the gravitational churn that the moon undergoes due to its elliptical orbit around the gas giant Saturn. The water inside the icy crust will most probably be flowing in vertical convection currents, similar to those seen on Earth. There is some notable difference in the oceans of Earth and Enceladus. On average, the oceans back home are only 3.7 kilometers deep, while on Enceladus, this number is about 30, with 20 kilometers of ice on top of it.

The ice on the moon offers some insight into what exactly might be happening below the surface. Thinner ice suggests that the water below is less salty than the water below thick ice (as salts do not freeze with the water). This suggests that thinner ice being found at the poles might indicate the same conveyor belt current like the one that flows back here on Earth. This also means that if in the future we want to find life on Enceladus, this new information will come in handy.

Since it is so far from the Sun, Enceladus relies wholly on the heat generated by the gravitational churning, which means any form of life will be centred around that one source of energy. It is up to a future mission to explore this mysterious yet beautiful world and tell us more about what it holds below the icy surface.