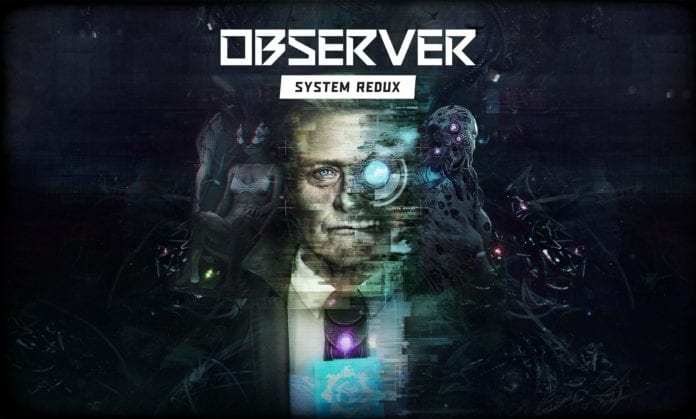 Puzzle games are some of the most underrated titles of today. Ask anyone what game anyone likes to play, and you would mostly end up with stuff like FPS, MOBA, RPG, and so on. RTS games and puzzle games are some of the most underplayed because people generally don’t like exercising their brains over a video game (The few that do are blessed with extra big brains that can crack hash codes before a supercomputer does – duh!). I got a chance to try out one such game recently – being possessed by the idea that puzzle games suck. Boy, was I wrong! Puzzle and horror can be a very unique combo – a deadly one when mixed properly – and Observer: System Redux has all the ingredients for that. System Redux is a next-gen remaster of the 2017 game, bringing with it enhanced visuals with next-gen consoles’ power.

Observer: System Redux takes off into the future – the year is 2084 in Ukraine, one of the countries where people have their bodies filled with small devices and implants to improve the efficiency of everyday activities. Humans had tweaked with their future, and there was hell to pay for playing with fate. First came a war which wiped out a majority of the population. The ones who survived were forced to pick up implants recklessly to survive – which invited the neurophage with open arms. Anyone and everyone with implants can get the neurophage – a weird contagious disease that spreads through the implants. Finally comes Chiron Corporation – a super megacorporation who have a monopoly over practically everything – especially the implants and the mods the people use.

In Observer: System Redux, players start off in the feet of Daniel Lazarski, an “Observer”. Observers are neural detectives whose main objective is to find out the truth for themselves. The game starts off with a pretty flat note, but things quickly take a turn for the worse as he is forced to investigate his son Adam’s death. A simple death investigation spirals into chaos as Daniel finds out stuff he himself didn’t account for. A simple tenement in a Class C district turns up more secrets than the Chiron headquarters could ever have.

While investigating Adam, you will get involved in the lives of a few hundred more folks in the tenement – blue-collar workers whom Chiron thinks as “disposable”. It isn’t a low-class dwelling if people are involved – and not involved – in the lives of one another. The game packs these as “investigations” (a rather eloquent way of stating “side quests”), and leave it to the player to decide if they want to pursue them for that sweet badge of 100% completion, or simply wade through the main story as first as possible.

The story itself sadly isn’t really one of the reasons you should play the game. The game’s ending is really something that lets down the plot development as everything comes down to a binary choice in the end. This is highly reminiscent of Mass Effect 3 and why it wasn’t really well received as a proper ending for the franchise. It doesn’t help that Daniel Lazarski himself is a very boring character despite Rutger Hauer doing his voice (Blade Runner anyone?). It’s the intense environment and the seizure-inducing special effects that really mess with your mind – providing the ultimate horror experience.

Observer: System Redux calls quests as “investigations” since it follows the path of a detective. Don’t mistake to be it to be your average L.A. Noire style investigations though – it has a lot more in store for an unwary player. Interrogations here happen with dead (or severely injured) people through some sort of a neural connection, and one has to rely on their instincts to get through the clues and get to the stuff that really matters. You can keep track of your investigations on a special device that all Observers are equipped with (termed as “Dream Eater”). All quests start off with a discovery, which progressively adds more pointers to your device as you find more clues and progress through the story.

Observer: System Redux doesn’t hold hands when it comes to find out clues and figuring out the path to the next checkpoint of the investigation. A keen eye for details is useful and goes a long way in pushing the completion pointer forward (if you care about it, that is). Lazarski is equipped with better stuff that can certainly help in the detection of these clues, though. You have access to two different modes (which is nothing but an alternate shader for the game) that helps highlight clues. One of them can be used to put electronics, augmentations and anything synthetic under a watchful eye, while the other mode is mostly used for analysis of organic matter. I found it easier to find clues with the mode that highlights synthetic gear, as most clues are synthetic anyway (except in a few cases where something as trivial as blood stains open up major plot points in the story). The goal is to keep following the trail till it answers all questions one could have about the victim.

The real creepy part in Observer: System Redux comes from the actual interrogations. Unlike in other detective games, Lazarski hacks into the mind of a person to conduct a neural interrogation in Observer: System Redux. The neural interrogation is perhaps one of the best – and the worst – features of the game. Don’t get me, it feels awesome to dig into the mind of a person – what really hampers the experience is what you discover within it. A ton of flashing lights, pattern changes as well as dematerialization and rematerialization of items make it a nightmare even for people without visible symptoms of epilepsy. Add a list of poorly added jumpscares to that, and you’re already aware of what (and what not) to do while in the mind of another person.

Observer: System Redux doesn’t have guns, probably because of the fact that most Observers were deemed to be mentally unstable enough to wield one. This means that one has to rely on their senses alone to dodge enemies in the game when they come. Most of the bosses behave like the demons like Agony (Anybody remembers that indie from 2018? Yes, me neither.) – you need to evade them by walking past them in the least conspicuous way possible. I felt that this was quite unnecessary as it slowed down progress in the game unnecessarily.

It won’t really be a linear adventure game if there aren’t bits and pieces strewn throughout the game world for you to collect and brag to your online friend circle about, would it? Yes, the game lays focus on some sort of collectable cards that the player can collect to add another difficult-to-earn achievement to their collection. The game also has doses of synchrozine distributed throughout, which must be collected if one intends to use Lazarski to his fullest extent. This anti-depressant improves synchronization (duh, it’s in the name) and helps “reduce stress” during an investigation. I find it surprising that Lazarski despises junkies and the drugs they take – yet he himself can’t go on without a constant supply of anti-depressants up his veins.

A Wonderfully Optimized Title (for AAA studios to learn from)

Yes, the title pretty much summarizes it. Observer: System Redux is one hell of a next-generation game that runs without any smoothly without any form of frame drops whatsoever. DX12 shaders obviously look better, but it’s recommended to drop down to the DX11 shaders if anything beyond a Pascal GPU is used for running the game. The game looks visually appealing, though it can appear extremely dark at times. This makes observing at the textures a bit difficult for the PCMR fans, but I guess we will have to live with what we have.

Despite the optimization, it could really do well with a setting that reduces the flickering effects a bit. The transitions don’t give any sort of visual warning before they happen, which can show up as seizures even in people without any known history of epilepsy. I’m not asking for an “easy mode” – I’m merely asking for something that doesn’t mentally destabilize like the junkies in an average C-class district in 2084’s Ukraine.

Observer: System Redux is an amazing puzzle game with horror elements that can shake one to the core. It also has a cyberpunk setting – something which clearly seems to be the theme of choice for this generation. While it’s not worth buying at full price, it’s definitely worth getting it on a sale and trying it out. Be warned that the game might not suitable for people with a history of epilepsy or who had suffered seizures in the past.