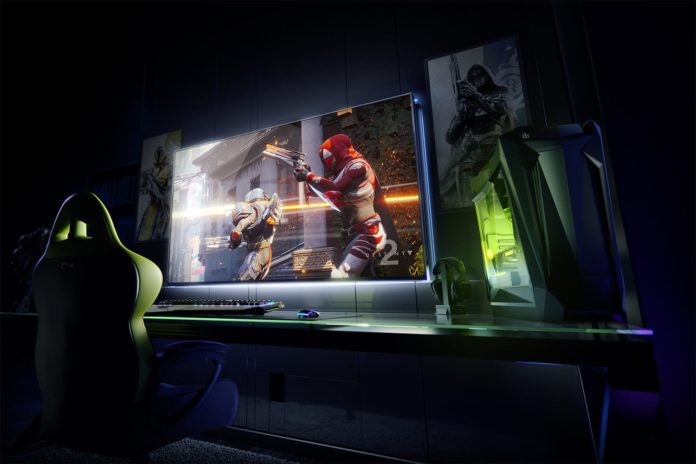 NVIDIA’s 65-inch Big Format Gaming Displays (), have finally arrived amidst much speculation and constant delays. They originally unveiled these 65-inch 4K HDR displays at CES 2018, with promises of a summer launch. That didn’t happen though and all we got were delays and more delays. This project got some good news earlier this year when a late February/early March release was announced. And now it is finally here in the form of HP OMEN X .

The Big Format Gaming Displays were initially backed up by three companies: Acer, ASUS and HP. But out of these only HP has actually started selling its BFGD products in the form of the OMEN X. This initial support and launch of products together in 2018 was also due to the fact of the increasing popularity of big screens for entertainment. The fastest in this slow race to market has been HP and will be earning some big bucks from it. The OMEN X display will have NVIDIA’s Shield integrated into it, so you’ll be able to access streaming apps and Google Assistant on it too and use it as more than just a giant gaming monitor.

HP has added a matching soundbar to its display, and it includes three stereo amps with modes for both gaming and entertainment. The display itself includes three HDMI 2.0 ports, one DisplayPort, two USB ports, and two USB ports for charging. HP has also put in a built-in SHIELD TV console. This can be used as a media player to stream content from Amazon Video, Netflix, Hulu, and other services. The purpose of all this is simple. There are many out there looking at this to be an entertainment device, apart from the gaming aspect related to it.

To know more about the detailed specifics of these display giants, click here.

We know that the cashing in on this technology by the various companies was due to its popularity, something which may lead us to believe that it will come relatively cheaper due to competitive pricing. But the reality looks a bit different. HP has been recently selling its OMEN X at an initial price of $4999.99 and that isn’t really cheap.