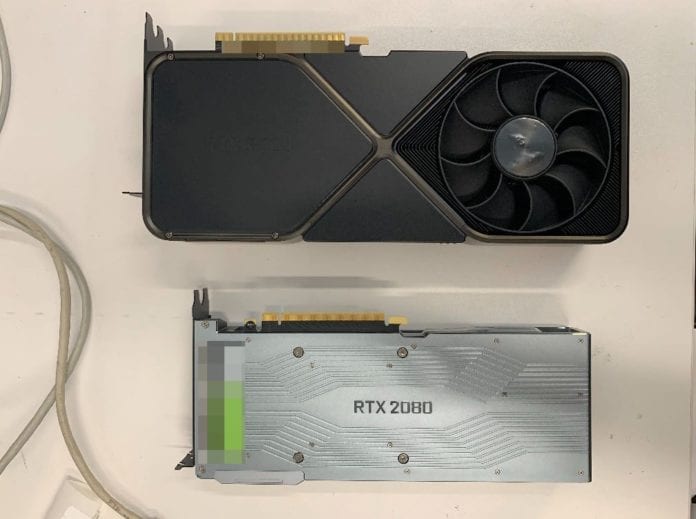 A new image of the NVIDIA RTX 3090 graphics card has leaked thanks to @GarnerSunset. The image shows the card with an RTX 2080 at its side for scale. Following the previous leaks regarding the RTX 3000 (Ampere) series, it looks like the new GPUs will be much bigger in size when compared to the RTX 2000/Turing cards.

The leaker also claims that the 3090 will cost $1400, which is something we’ve heard before in the rumor circles. We previously reported on the RTX 3090’s existence and how it may differ from a Titan RTX 3000. Interestingly, it seems like the RTX 3090 will be a 3-slot card, while the RTX 3080 will be a slimmer dual-slot card.

While we don’t have any official confirmation of the card not its specs from NVIDIA, we do have some leaked information regarding the same:

Aside from that, we also saw the lower end RTX 3050, 3060 and 3070 GPU specs leak out earlier. Regardless, we should get our first official look and the cards, and their performance, soon for ourselves. After NVIDIA first introduced raytracing in their consumer GPUs, the technology has improved and been adopted by game developers.

Both next-generation consoles, the PS5 and Xbox Series X, will include hardware raytracing support, albeit on AMD’s RDNA 2 architecture. While we’ve seen a lot of leaks regarding Ampere’s specifications, we still have to see what AMD will bring to the table. It is widely expected that both NVIDIA and AMD’s next-generation graphics cards will include highly improved raytracing support compared to the RTX 2000 series, which are currently some of the best graphics cards on the market for gaming and content creation.

NVIDIA is expected to reveal the RTX 3000 (or Ampere) lineup of graphics cards at the Geforce Special event on September 1st. You can find more details about it here.