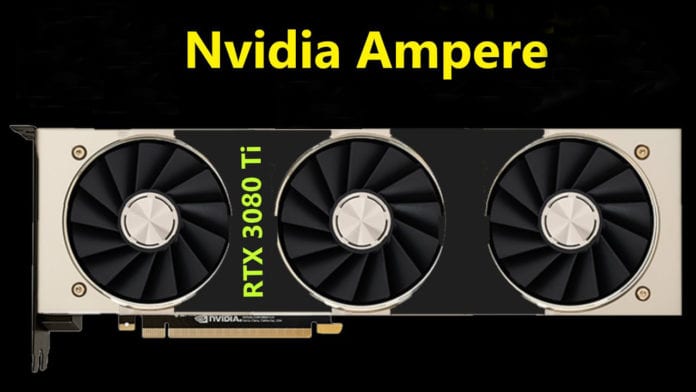 With many rumors and speculations about the RTX 3000 series, theories are also getting popular, one of them being the graphics architecture behind the lineup. Many leaked benchmarks and articles are claiming the exact specifications of the lineup. However, those claims cannot be trusted completely and should be taken with a grain of salt.

A YouTube channel named “Moore’s Law is Dead” uploaded a video on the RTX 3000 lineup. The YouTuber has claimed that he has spoken to the inside sources of NVIDIA. He said that the lineup will bring a new era of 4k gaming on PCs. Furthermore, he shared many details about the lineup. Most of the claims are focused on the GA102 GPU, which theoretically would be NVIDIA’s top-end Ampere consumer. It is most likely to be named the RTX 3080Ti.

The GPU would allegedly be running on a boost clock of up to 2.2 GHz. It would offer nearly 21 TFlops of raw performance and a huge 18Gbps memory bandwidth which is around 40% faster than the 2080Ti. The GPU would reportedly also support PCIe 4.0.

The new lineup consists of two more variants: GA103 and GA104. These two lineups are expected to be the premium range GPUs of the series. They can allegedly push the already immense clocking speed of 2.2GHz to 2.5GHz. However, these particular specs are no more than claims from the apparent leak source and have not been officially confirmed yet. Observations of these new 7nm RTX 3000 series revealed that they hit a massive CPU bottleneck at 1080p and 1440p. The YouTuber argues the point that with these new Ampere GPU models, 4K graphics would become the mainstream standard in the world of gaming.

Among the various information gathered from the leak, the topic of ray tracing was also covered. With the new GPU, NVIDIA is focusing on performance rather than increasing RT cores. The reports claim that the Ampere RT cores work four times faster in terms of performance than the present RTX Turing cards. The reports also claim that in terms of ray tracing the upcoming RTX 3000 would be a lot better than the current flagship Turing models.

The series is expected to arrive in the third quarter of 2020. We have to see that the rumors, leaks, and speculations about the series hold true or not. There are many expectations from the series and it will definitely be a delight for the gamers.