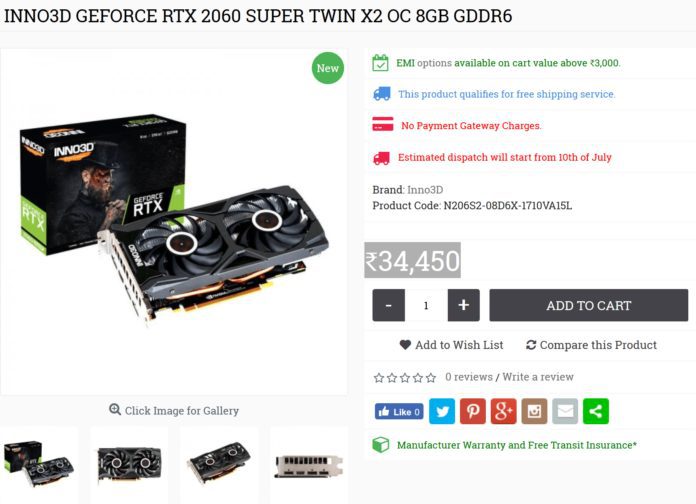 NVIDIA’s GeForce RTX 2060 Super and 2070 Super are arguably the best value parts you can buy from Nvidia right now (No seriously, I’m not just saying that because I bought an RTX 2070 Super). For slightly more than GTX 1070 launch money, you’re getting GTX 1080 Ti levels of raster performance, along with the full set of Turing goodies including ray tracing and DLSS. And the RTX 2060 Super handily beats the vanilla 1080 while giving you all those same extras. In normal markets, they cost a good bit more than the Radeon RX 5700 XT and 5700 respectively, making the AMD options viable contenders if ray-tracing’s not your thing.

But graphics card pricing in India has always been a little iffy. The RX 5700 XT models go for upwards of Rs. 40,000. Meanwhile, the Supers are now on sale at rates significantly lower than their launch prices.

Inno3D’s got the GeForce RTX 2060 and RTX 2070 Twin X2 OC for sale at astonishingly low prices. The 2070 Super Twin X2 OC sells for Rs. 39,999, just below the Rs. 40k psychological mark. Meanwhile, the 2060 Super Twin X2 OC sells for Rs. 31,999. At these prices, it’s almost impossible not to recommend these parts over their Navi counterparts. Sapphire technically has a 5700 for under 30k, but it’s a reference model. As someone who’s been driven insane by AMD reference blower fans and throttling, that’s a card I’d take a hard pass on. Meanwhile, the Sapphire Pulse 5700 XT sells for exactly the same price as the 2070 super. You get less performance and no ray-tracing for…the same price.