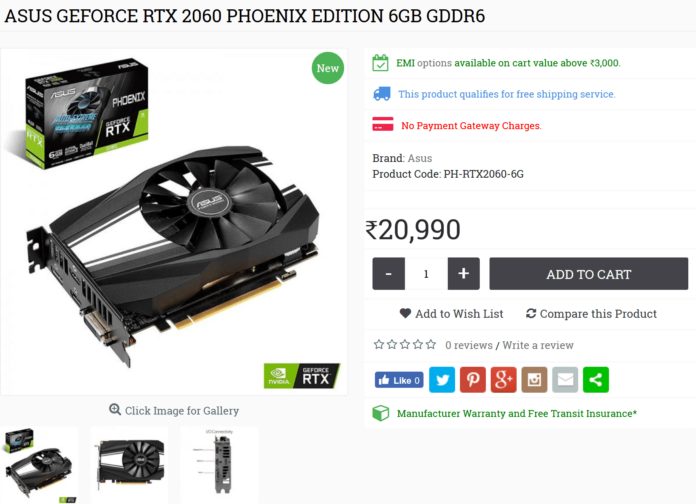 When NVIDIA first launched the GeForce RTX 20 series cards last year, the majority of the gamers were miffed at their high pricing and the lack of ray-tracing supported titles. NVIDIA took steps to rectify that mistake with some encouragement from AMD in the form of the Radeon RX 5700 lineup. The first was the release of the GTX 16 series GPUs that made most of AMD’s Polaris offerings obsolete and brought the prices of the rest down by a notch. Then came the GeForce RTX Supers with beefed up memory and cores along with better ray-tracing capabilities. The original RTX cards with the exception of the RTX 2060 were phased out. However, despite , they were hard to recommend as there was only a very small gap between the Super and non-Super variants.

That changes effective immediately with the release of the Asus GeForce RTX 2060 6GB which is priced at just Rs. 21,990, the same as the GTX 1660 Ti while offerings better performance and baseline ray-tracing capabilities. This essentially makes it the de-facto 1440p card to buy and can also be paired with a micro-ITX for some serious performance while maintaining a small form-factor.

The Asus GeForce RTX 2060 Phoenix is a dual-slot card requiring an 8-pin connector for power with a 500W PSU requirement. Although it comes with just a single fan, don’t worry it won’t heat up. We were able to test this card and it doesn’t overheat.

At 1440p in Unigine Heaven 9Ultra w/ 8xAA), average frames hovered in the 70s with a baseline temp of 45C and a peak of 80 to 82C. The operating core clock was consistent at 2100 MHz, with no throttling during prolonged runs.

The ASUS GeForce RTX 2060 Phoenix comes with 6GB of GDDR6 memory which can be overclocked to 16Gbps quite easily. The RTX 2060 has 1920 CUDA cores clocked at a base and boost clock of 1365MHz and 1710MHz, respectively. It has a 192-bit wide interface, half of that of the RTX 2060 S but at 1080p and 1440p, it won’t have a significant impact. The prices of the other non-Super cards are also dropping as retailers are looking to get rid of excess stock.