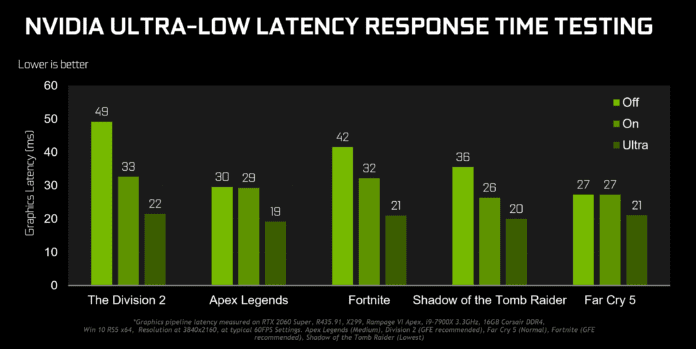 They loudly decried any possible benefits of AMD’s new driver features–the new Low Latency mode and the Navi-exclusive Radeon Image Sharpening. However, after some frankly embarrassing comparisons between Radeon Image Sharpening and DLSS in its poorer forms–notably in Battlefield V, Nvidia seems to have low-key conceded that these are features people might actually want. The newest Nvidia Gamescom driver update brings with it a raft of new features that Radeon owners might find strangely familiar.

There’s “Ultra Low Latency Mode,” which reduces inputs latency when you’re in the 60-100 FPS range but are still GPU-bound. And there’s also a newer sharpening approach in Freestyle, which appears to compare more favorably with the contrast-aware sharpening approach used by the Navi cards. Nvidia’s made sure to point out that Freestyle sharpening works with a much wider selection of games and supports more APIs. This would be great news except for the fact that contrast aware sharpening has already been ported to Reshade. Anyone with a modern GPU (of any sort) can enjoy RIS-like sharpening by simply using the new Reshade filter. This popped up about 2 weeks before I got rid of my RX 580. I found CAS sharpening to offer comparable image quality to native presentation when used with an 85-90 percent resolution scale. Any lower and sharpening artifacts become very apparent. Nevertheless, it is a good way to get results when you’re GPU-bound.

NVIDIA’s new driver update did bring something genuinely new and interesting, though limited to Turing users. A new Integer scaling mode has been integrated at a driver level and allows users to opt for pixel-perfect scaling, as opposed to interpolation. Interpolation is what causes the appearance of blur in most scaling algorithms. Integer scaling instead introduces actual pixelation. That might not sound like a good thing but it’s actually the most authentic way to run pixel-art games as it presents them just how the artists intended.

Furthermore, NVIDIA’s new GameReady driver boasts FPS boosts in several games with the majority being AMD sponsored titles with Vulkan API or eSports titles where you need 60+FPS for the best experience. NVIDIA claims a boost of up to 23% across games like World War Z, Strange Brigade, Apex Legends, Forza Horizon 4 and Battlefield V. All these titles are based on a low-level API like Vulkan or DX12, showing team green’s shift from their highly optimized DX11 drivers at last.