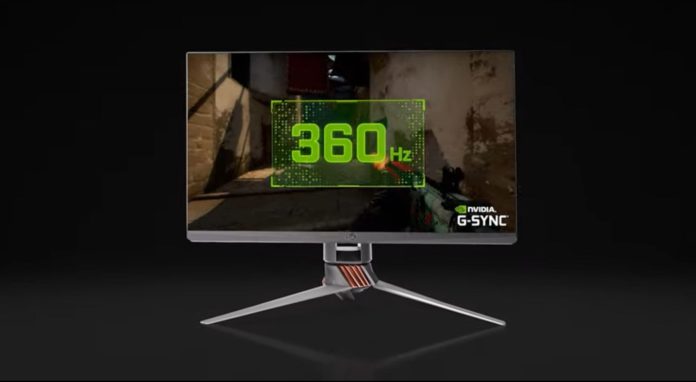 NVIDIA has just announced the arrival of a new king in the gaming monitor segment – the world’s first 360Hz G-Sync supported display. Here’s what the company had to say regarding the announcement:

In the world of competitive gaming, where mere milliseconds can make the difference between victory and defeat, NVIDIA today unveiled new G-SYNC® displays with a 360Hz refresh rate, providing Esports enthusiasts and competitive gamers with the fastest gaming displays ever made. At 360Hz, game frames are displayed once every 2.8ms—up to 6X faster than traditional gaming displays and TVs.

NVIDIA and ASUS are showcased the world’s first G-SYNC 360Hz display–the ASUS ROG Swift 360. The display, which will be available later this year, pairs perfectly with GeForce RTX to deliver the absolute best competitive gaming experience.

The 24.5-inch monitor will make a great addition to pro-gamers’ arsenal, as we’ve already seen how faster refresh rates can help in improving in-game performance. The biggest boost from using a 360Hz monitor is going to be the enhanced readability during fast motion. This should help in games where text plays a more important role such as in DOTA 2. The display will also implement Variable Refresh Rate technology.

The ASUS ROG Swift 360 features ASUS’s new sleek ROG finish that feels at home on the grand stage at any Esports event as well as:

First introduced in 2013, NVIDIA G-SYNC is best known for its innovative Variable Refresh Rate (VRR) technology that eliminates tearing by synchronizing the refresh rate of the display with the GPU’s frame rate.  Since then, G-SYNC processors have added new display technologies to accelerate Esports panels, including dynamic overdrive to enhance player perception, custom-tuned firmware to improve image quality for better target acquisition, and now 360Hz refresh rates for rapid reaction time.  While Esports pros previously accepted frame tearing on their display to avoid waiting for the next frame to update, with G-SYNC’s 360Hz and VRR technologies, frames now refresh in less than 3ms, so Esports pros can get both tear-free frames and incredibly low latency.

We’ll keep you updated on CES with our coverage of events. In the meantime, do keep checking out this space for more tech news.

Read More from our CES 2020 coverage: