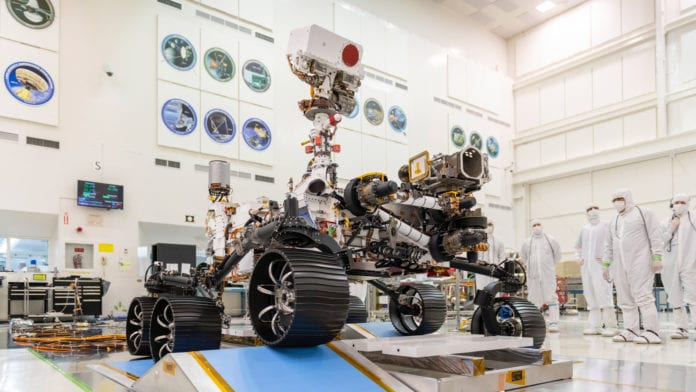 NASA has launched a new Mars rover “Perseverance”, which is said to have a six-month journey to Mars. Perseverance is a car-sized rover which was launched into space from Florida’s Cape Canaveral, atop an Atlas 5 rocket, a $2.4 billion (roughly Rs. 17,974 crores) worth mission, to search for signs of potential life on Mars.

Perseverance is the third and also the final Mars mission which has departed from Earth this summer with the earlier ones being in July. China and the United Arab Emirates have also launched their first Mars expedition.

The next-generation Mars rover which is a car-sized six-wheeled scientific vehicle has been scheduled to utilise a mini-helicopter on Mars and test the equipment for future human missions to Mars. Perseverance is expected to reach Mars next February.

Perseverance is basically out on an alien-hunt mission, or at least, signs of it. The primary mission of Perseverance is to find traces and to detect the possibility of ancient life which could have been present on Mars.

Perseverance was sent to Mars with the intent of bringing back Martian soil. Once it is back on Earth, NASA will work on another mission which will analyse the data. This is NASA’s fifth Mars rover but since this mission has a very different motive, it will also be a first of sorts for NASA.

This Mars Rover will be housing the first microphone on Mars to capture the sounds of the rover’s descent to the surface of the planet. Perseverance will be the first rover to take pictures with a zoomable camera; equipped with a super-lightweight helicopter, it is going to become the first extraterrestrial aircraft. It’s also the first rover powered by American plutonium.

Perseverance has now marked NASA’s ninth journey to Mars. Perseverance is supposed to land at the base of an 820-foot-deep (250 meters) crater called Jezero which is a former lake from 3.5 billion years ago. Scientists have suspected that it could possibly hold certain evidence of potential past microbial life on Mars.

There have been debates for a very long time where scientists have discussed whether Mars – which was once considered to be a much more hospitable place than it is today – ever had traces of life on it. We all know that water is considered a to be the key ingredient for sustaining life, and it was discovered that Mars, billions of years ago, had an abundant amount of water on its surface before it went on to become a harsh and presumably devoid of life planet.

The United States also has some plans which include sending astronauts to Mars in the 2030s under a program that hopes to make the moon a testing platform for human missions before finally embarking on a mission to the red planet.

Perseverance will conduct this particular experiment which will help in devising a plan to include the carbon dioxide-rich Martian atmosphere into possible future rockets which will be launched off the planet, to be able to produce breathable oxygen for future astronauts.