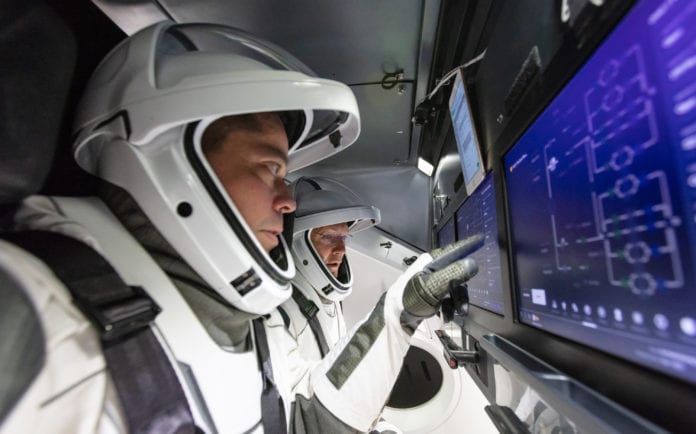 NASA astronauts Robert Behnken and Douglas Hurley have entered quarantine two weeks ahead of their upcoming flight to the International Space Station (ISS) on the agency’s SpaceX Demo-2 mission.

They will lift off aboard a SpaceX Crew Dragon spacecraft carried by the company’s Falcon 9 rocket on May 27.

Due to the coronavirus pandemic, people all over the world recently have experienced varying degrees of quarantine — a period of isolation from others to prevent the spread of contagious illness.

However, for crews getting ready to launch, “flight crew health stabilisation” is a routine part of the final weeks before liftoff for all missions to the space station, NASA said on Wednesday.

Health stabilisation procedures were introduced for the Apollo programme, in which NASA astronauts left low-Earth orbit to journey to the Moon, and have continued through the shuttle and International Space Station programs.

Behnken and Hurley will be the first NASA astronauts to fly to the station aboard an American spacecraft launched from American soil since the retirement of the Space Shuttle Program in 2011.

They will meet up with the Expedition 63 crew already in residence aboard the orbiting laboratory — NASA astronaut Chris Cassidy and cosmonauts Anatoly Ivanishin and Ivan Vagner.

Spending the final two weeks before liftoff in quarantine helps ensure the Demo-2 crew arrives healthy, protecting themselves and their colleagues already on the station.

NASA’s quarantine rules are designed to protect astronaut crews while allowing them to continue working closely together, by limiting who can be in close proximity to them and ensuring they stay in environments in which their exposure to contagions or other hazardous materials can be tightly controlled in advance of their launch.

Some additional safeguards have been added because of the coronavirus. For example, anyone who will come on site or interact with the crew during the quarantine period, as well as any VIPs, will be screened for temperature and symptoms.

Hurley and Behnken, as well as those in direct, close contact with the crew, will be tested twice for the virus as a precaution, NASA said.