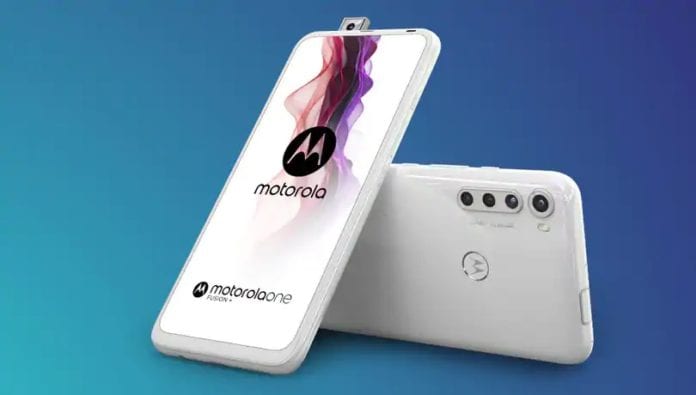 Lenovo-owned Motorola seems to be trying to get back on track in the Indian smartphone space with the Motorola One Fusion+. The smartphone hit Europe last week with a price tag of EUR 299 and has now officially made its way to India. This is a new addition to Motorola’s ‘One’ lineup of smartphones in India, which already includes One Action, One Power, One Vision, and One Macro. Here’s what you need to know about the latest offering from Motorola.

The handset features a 6.5inch ‘Total Vision’ FHD+ display with 19.5:9 aspect ratio, and supports HDR10 and DCI-P3 colour space. With Motorola One Fusion+, the company has decided not to jump into the high refresh rate bandwagon and has provided the typical 60Hz screen. In terms of design, the One Fusion+ comes with a polycarbonate (plastic in other words) back and will be available in two colours: Moonlight White and Twilight Blue.

One of the highlights of the smartphone is the pop-up selfie camera, making it the second phone from the company to come equipped with such a mechanism.

In terms of specifications, Motorola One Fusion+ packs some good hardware under the hood. Unlike its European cousin, which had Snapdragon 730 SoC, the Indian one comes with a slightly better gaming-oriented Snapdragon 730G chipset. The rest of the specs remain identical for the Indian centric variant. It seems the selection of the processor for India has been done keeping in mind the competitors it will face, which are likely to be Poco X2 and Realme X2.

On the storage front, it comes only in one variant coupled with 6GB of RAM and 128GB of storage that is expandable up to 1TB via a hybrid microSD card solution. Powering the internals is a beefy 5000mAh battery with an 18W TurboPower charger to juice it up. Though it packs a massive battery, the fast charging solution seems a little short when compared to the rivals who provide 27W and 30W charging.

Just like all modern phones nowadays, the device features a quad-camera array on the rear, aligned in the top left corner in a vertical fashion. This setup includes a 64MP primary sensor (probably from Samsung) with an f/1.8 aperture, accompanied by an 8MP ultra-wide-angle lens with an f/2.2 aperture and 118° FOV, a 5MP (f/2.4) macro lens, and a 2MP (f/2.4) depth sensor. On the front, Motorola One Fusion+ comes with a 16MP (f/2.2) selfie shooter housed inside a pop-up module.

In terms of other specifications, it houses a rear fingerprint scanner with the Motorola logo embedded in the centre. It retains the good ol’ 3.5mm headphone jack, just like most other mid-range smartphones. The device even has a dedicated button for summoning the Google Assistant. The device’s weight is on the heavier side, weighing at 210grams. On the software front, Motorola One Fusion+ runs on near-stock (which Motorola calls My UX) Android 10 OS out-of-the-box. As for connectivity, the smartphone supports dual 4G VoLTE, Wi-Fi 802.11ac and Bluetooth 5.0. The phone has a USB Type-C (USB 2.0) port for charging and data transfers.

Motorola One Fusion+: Pricing and Availability

Motorola has delivered exceptional pricing for Motorola One Fusion+, which is Rs 16,999. At this price point, it will go directly head-on with Poco X2 and Realme X2 (both powered by the same Snapdragon 730G SoC). Motorola seems to have learned a lesson from the blunder it did with the pricing of Motorola Edge+ and has thus priced its mid-range offering aggressively.

The smartphone is scheduled to go on sale via Flipkart on June 24 starting noon.