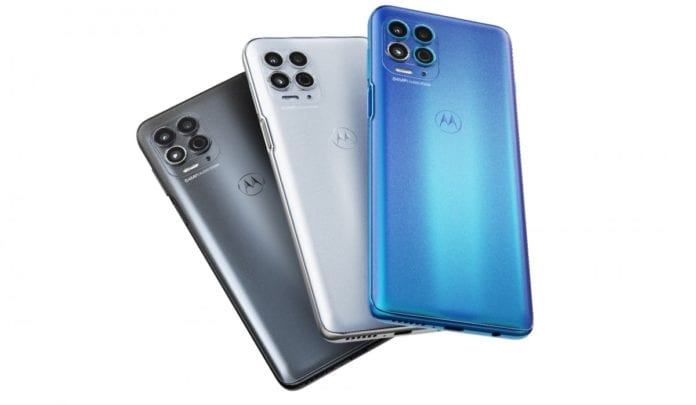 Motorola (or Moto or even Lenevo) is back again with another mid-ranger, and this time they have scored a century with Moto G100. For those unaware, Moto G100 is a rebadged Moto Edge S released in China a few months ago, and it’s the first Moto G series smartphone to come with a Snapdragon 8 series chipset (more on that later.)

Starting with the specifications, the Moto G100 features a 6.7-inch FHD+ IPS LCD panel with a refresh rate of 90Hz and HDR10 certification. There are two punch hole cutouts in the display housing a 16MP primary sensor and an 8MP ultra-wide camera for selfies.

Well, Moto’s G series has been an underdog for quite a few years now, but that’s not the case with G100. Qualcomm’s Snapdragon 870 chipset powers the G100, coupled with 8GB of RAM and up to 128GB of onboard storage, which is expandable up to 1TB through a microSD. It also has 5G connectivity. G100 boasts a 5000mAh battery which can be charged using the 20W fast charger provided in the box. It also brings the 3.5mm audio jack.

In the optics department, the G100 sports a primary 64MP camera with f/1.7 aperture, a 16MP ultra-wide camera and a macro camera which also doubles up as a ring LED flash. There’s a 2MP fixed focus camera for depth detection and a ToF sensor.

It runs on Moto’s My UX on top of Android 11 out of the box. G100 brings Ready For Platform, which brings a desktop interface to the connected display; in easy words, it’s Motorola’s take on Samsung’s Dex. There’s a docking station that you can use to connect the G100 to an external display while charging it simultaneously.

Moto G100 will be available in Iridescent Sky, Iridescent Ocean and Slate Grey colours in Europe and Latin America at a starting price of £449.99.