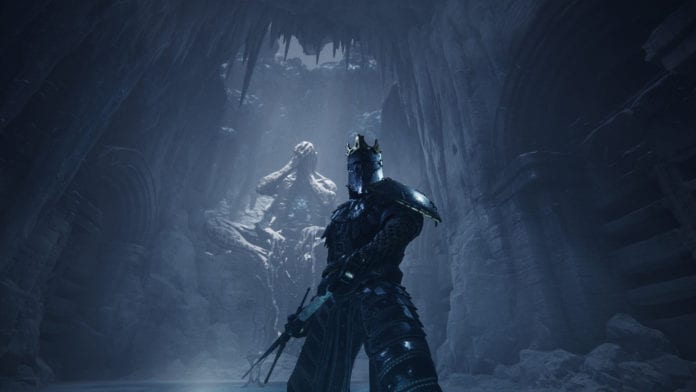 Mortal Shell, the Action RPG from Cold Symmetry, evokes the same feeling of unease and confusion as the original Dark Souls. But does it do anything innovative?

I have the played the game’s opening few hours, and having recently played the Soulsborne games that this is inspired from, it’s hard not to compare them. Mortal Shell (formerly Dungeonhaven) follows the same Soulsborne blueprint that From Software has mastered over the years. The game, developed by a team of 15, takes very clear influences from the original Dark Souls more than the other games that came in its wake.

Opening Hours – I’ve Felt This Before

Mortal Shell starts with you, the player, waking up on the unknown ground, likely separate from the actual universe where the game takes place. Your body is humanoid but ghostly. The tutorial teaches the basic mechanics of light/heavy attacks, dodging, consuming items, and a unique trick – hardening. This is a defense mechanism wherein upon the press of a trigger, you can harden your body to absorb hits from enemies. It’s a times mechanic, meaning you can’t just spam it every time someone swings their sword at you.

Right from the get-go, I felt it has the same sense of mystery as the original Dark Souls. Not knowing the rules of this world can be a little overwhelming, but Cold Symmetry has paced the opening section of the game pretty well. I never got the sense that ‘this is too much for me to handle’. If you’ve played other games in the genre, you’ll know what to expect going in. After teaching you the mechanics, you’re teleported to an open area known as Fallgrim. The best way I can describe it that it’s basically the Firelink Shrine (Dark Souls) of this game. This is where you can upgrade your weapons, get ‘sense instinct’, and upgrade your abilities.

In Mortal Shell, you can find the dead bodies of previous warriors and inhabit them to use as you guessed it – Shells. There are 4 distinct types of shells that you can find in the world which you’ll find throughout the course of the game. Each shell needs to be studied by spending experience points (or ‘tar’) into them. That’s a recurring theme with almost every item in the world. Like Dark Souls, none of them directly tell you their use. You’ll have to use each item a set number of times to increase familiarity and thus increasing your knowledge of them.

You can also parry enemies to perform a riposte attack, which will instantly kill the smaller enemies in the game. This riposte will also refill your health, which can be really rewarding. It makes the game more balanced in its combat encounters. I guess that’s the best way to describe Mortal Shell up until the point I’ve played – Balanced. Everything from the world and characters to the combat feels pretty polished. But I have yet to encounter something that truly pushes it ahead of the games it takes its’ inspirations from. Maybe the latter half of the game will win me over.

Mortal Shell releases on August 18 on PC (Epic Games Store), Xbox One, and PS4. The game will release on Steam next year.